An apparently legitimate (i.e., non-fraudulent) early review of Danis Tanovic‘s Triage, which will play at the Toronto Film Festival, appeared a few hours ago. The writer (who couldn’t be bothered to reply to my email) is Anya Wassenberg, a Toronto-based writer/model. She’s not a film scholar, okay, but she did she care enough about Tanovic’s film to post on artandculturemaven.com. “If you’re going to the Toronto International Film Festival at all this year, Triage is a must-see,” she says. 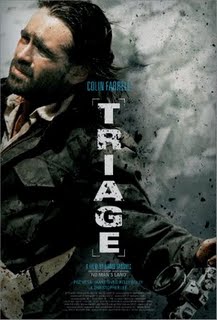 She calls it “a truly engrossing film that features masterful storytelling and nuanced, completely convincing performances; one that tackles some of the darker realities of human existence with a view that seems entirely authentic, and truthful in a way that mainstream films so very seldom are.” Her stand-out line: “Damn you, Colin Farrell, for making me cry!” Only I don’t get the “damn you” part. What’s wrong with weeping during a film?