“Every once in a while, someone will ask me if I attend the Cannes Film Festival,” Hollywood & Fine‘s Marshall Fine begins. “I always say the same thing: ‘No, and here’s why: Anything that’s good at Cannes will open in theaters. And anything that’s bad will be in the New York Film Festival.’

“I actually wrote that about 20 years ago in a newspaper column, but my assessment remains unchallenged by the lineup of the 47th annual New York Film Festival, currently hoodwinking ticket buyers at New York’s Lincoln Center for another week.

“While there are a couple of films in this year’s festival that I’d actually pay money to see (Pedro Almodovar‘s Broken Embraces and Precious: Based on the Novel ‘Push’ by Sapphire), the lineup firmly follows a formula to which the NYFF has become addicted for decades.

“That formula relies heavily on two kinds of films: the deliberately provocative and offensive (hence, its inclusion of Lars von Trier‘s Antichrist and Harmony Korine‘s Trash Humpers, among others) or films that are supposed to be good for you. Which is why I think of the NYFF as the oat bran of film festivals, full of fiber and boasting little real flavor.

“NYFF obviously has no interest in matching Toronto or even Sundance for the number or scope of films it offers. Film program director Richard Pena has often referred to New York as a boutique festival, designed to showcase handpicked examples of what amounts to the best of contemporary cinema worldwide.

“Once upon a time, that meant films that, having been discovered by the NYFF, would find their place in the contemporary canon. But no longer: With its contrarian, over-intellectualized approach, the NYFF has become the ‘we know best’ festival, full of films that no one – except the selection committee and the people who actually made the movies – will ever care about.

“The films get their brief moment of glory at Lincoln Center, never to be seen again — or else to show up oh-so-briefly in one of New York’s arthouses, where they will prove all over again that no one wants to see them. (And, finally, on the annual 10-best lists of critics for the Village Voice and Film Comment.)

Here’s something I wrote a few weeks ago about the NYFF selection system.

To hear it from two Straw Dogs crew people, two major features — Warner Bros.’ Jonah Hex and Disney’s Secretariat — didn’t shoot in Shreveport due to lobbying from their respective (and married-to-each-other) stars, Josh Brolin and Diane Lane. Their motive, of course, was Brolin’s ridiculous bust in Shreveport in the summer of ’08 after finishing work on Oliver Stone‘s W. (i.e., the infamous Stray Cat altercation), and all the subsequent legal obstinacy from the Shreveport judicial system.

I subsequently told this story to some Straw Dogs honchos, and they didn’t tell me I was wrong. If there are other wrinkles, please inform.

Due to open next June, Jonah Hex stars Brolin as the title character (a wild west bounty hunter) with Megan Fox, Michael Fassbender, Michael Shannon, Will Arnett and John Malkovich. The director is Jimmy Hayward with a screenplay by Mark Neveldine and Brian Taylor. It shot all over Louisiana — just not in Shreveport. It shot studio interiors in Sylmar, California.

Due for release in October 2010, Randall Wallace‘s Secretariat — a biopic of Penny Chenery, owner of the 1973 Triple Crown winner Secretariat — stars Lane as Chenery with costars John Malkovich (double duty!), Dylan Walsh and Scott Glenn. It used locations in Kentucky and Louisiana with Shreveport cut out of the pie.

I was bothered by three things in Ruben Fleischer‘s Zombieland, and I don’t think it spoils it to explain them. (1) If you’re in a sprawling, zombie-inhabited supermarket and you’ve just killed a ghoul with a metal baseball bat, only a fool drops the bat on the floor because another one could be right around the corner. (2) If you’re at an amusement park, turning on the lights and rides is a pure idiot move because it will primarily do only one thing — attract zombies. (3) Zombies don’t smile maliciously, even if they’re clowns. 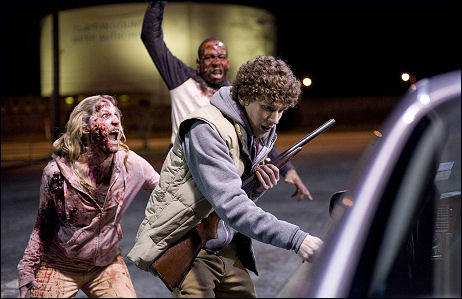 Why, I’m wondering, are Roman Polanski and his attorneys doing everything they can to delay his extradition from Switzerland to the U.S. when it seems foolish to even dream that he might be released and sent back to France? The Swiss have made their play and for governmental-ego reasons alone they’re certainly not going to let him go now…please. If I were Polanski I’d want to fly to the States and get this over with as soon as possible. I can’t understand why any realistic-minded adult in his position would want to delay the inevitable.

N.Y. Times reporter Michael Cieply yesterday summarized a September 1977 probation officer’s report concerning Roman Polanski, then 44. It “gives a jarring reminder that Mr. Polanski’s behavior at the time was being treated by key officials more as an exercise of bad judgment than as a vicious assault,” Cieply notes. “It is a window into how sex crimes, especially when they involved Hollywood luminaries, were viewed in that era.”

“While A Serious Man is funnier than No Country for Old Men and Burn After Reading, it also has more gravity to it. This is not just because it represents something of a homecoming for Joel and Ethan Coen, who grew up in the heavily Jewish Minneapolis suburb of St. Louis Park in the 1960s. They are hardly the kind to be sentimental about the old neighborhood. But in that milieu their smart-alecky nihilism feels authentic rather than arch — you understand, maybe for the first time, where they are coming from.” — N.Y. Times critic A.O. Scott in his 10.2 review.

“[It’s] a combination of a Bond movie and Point Blank, though more on the scale of From Russian With Love than, you know, Quantum Of Solace…something where the characters and the story are as prominent as the action stuff.” — Steven Soderbergh describing Knockout, his forthcoming spy thriller now being written by Lem Dobbs, to Empire. The film will star mixed martial arts (i.e., Muy Thai) fighter Gina Carano.

“My feeling was, If I don’t do this, somebody else will,” Soderbergh says. “I felt, somebody is going to look at her and go, ‘She should be in a movie!’ And I felt like, Why shouldn’t I be the person saying that?”

Bill Maher weighs in on Roman Polanski at 6:55 or thereabouts. “I’m certainly not rallying behind him…if you give a 13 year-old girl a quaalude and then do her in the naughty place against her will…if that’s not a crime then I don’t know where we draw the line. This is a case where, yeah…we are too permissive. I don’t want any part of [being behind Polanski]. If you can get away with doing that to a child, I guess you can get away with anything.” 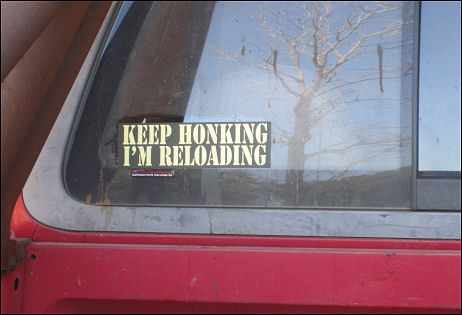 Cab window in pickup truck belonging to one of the Straw Dogs redneck bad guys. 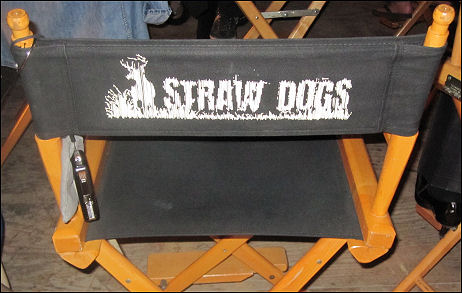 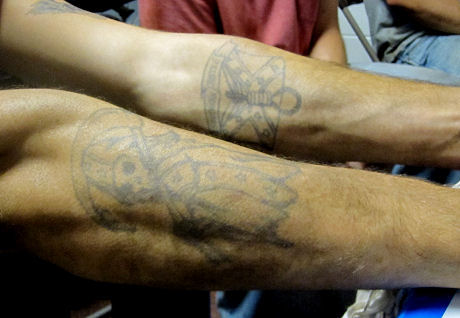 Fake tats on arms of Rhys Coiro, one of the Dogs bad guys. He’s probably best known for playing the eccentric and ill-tempered director on Entourage who had/has an acrimonious relationship with Kevin Connolly.

Zombieland‘s earnings of $8.5 million yesterday means it’ll earn over $20 or $21 millon by Sunday night, and with this the weekend crown. An appropriate response for the best zombie comedy since Shaun of the Dead. (I actually liked it more than Shaun.) But what happened to Michael Moore‘s Capitalism: A Love Story?

More to the point, what happened to the supposed (or at least strongly suspected) simmering hinterland rage about the multi-billion-dollar bank bailouts and the stacked-deck economy favoring the super-rich, which I figured would translate into at least a moderate level of support for the film?

An underwhelming Capitalism debut means people are just sitting there in their living-room easy chairs, too bummed or numbed to get up and do (or at least watch) something. God, what a lazy and stubbornly conservative country this is…honestly! Burned every which way by a system taken over by cowboys and all they want is a zombie chuckle. Or they’d rather just sit there, naively faithful to the red-white-and-blue capitalist mythology (i.e., anybody can get rich as long as they have the moxie!) to the last, and just hold on and ride it out.

Capitalism‘s four-screen opening in New York and Los Angeles last weekend averaged $57 grand per house, but this weekend’s cross-country debut on 962 screens didn’t happen. Moore’s film did around $1.3 million yesterday with perhaps a shot at $4 million for the weekend, at best, along with a $4,000 average. I’d like to see a territorial breakdown, but the bottom line is that American rurals just aren’t goin’ for it. I told myself last weekend that Capitalism might open big with the non-Eloi because the over-30s seem to be angry and ready to show it. I guess not. I guess a lot of people would just rather watch zombies or…whatever, sit around at home and drink beer. To me this is doubly depressing. Capitalism‘s failure this weekend is also America’s.