In a 10.7 posting, Vanity Fair.com’s John Lopez explains how the Coen brothers have been assembling a decade-by-decade cinematic portrait of this country that defines the American century. The 1920s in Miller’s Crossing, the 1930s in O Brother, Where Art Thou?, the late 1930s (or early 1940s) in Barton Fink, the late ’40s in The Man Who Wasn’t There, the ’50s in Hudsucker Proxy, the ’60s in A Serious Man, the ’80s in a Coen trifecta of Raising Arizona, No Country for Old Men and Fargo, the ’90s in The Big Lebowski, and the 21st Century with Intolerable Cruelty and Burn After Reading.

Barackobama.com is asking people to submit a 30 second video that makes the case for passing health insurance reform. Does this mean, given the Obama administration’s half-hearted, all-but-abandoned support of public-option insurance, that the spots should avoid mentioning this? Because that’s bullshit. The site’s choice of suggested topics certainly indicates that they’ve forgotten about a public option component. Wimps.

I saw two films today — Nowhere Boy at 11 am and Fantastic Mr. Fox at 2 pm. It’s too early to discuss either but that’s what I’ve been doing. And I’ve been sitting at a Starbucks at Eighth and 52nd for the last couple of hours, sending emails and doodling around. 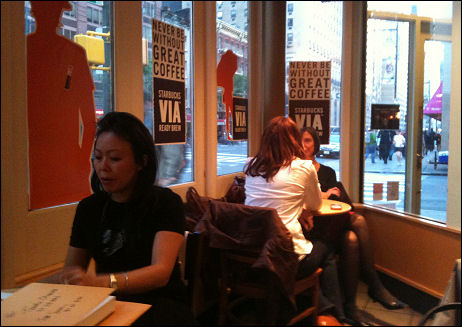 Less than two months ago David Mackenzie‘s Spread, a moralistic drama in the vein of Shampoo and American Gigolo about a young Los Angeles poon-hound (Ashton Kutcher) boning his way through a stunningly vapid life, opened and quickly died. It was guillotined by critics (earning a ruinous 14% Rotten Tomatoes rating) and had only made a lousy $249,590 by 9.6.09.

But I saw it on a screener last night, and to my surprise didn’t have that many problems with it. It’s too formulaic by half, but it struck me as an honest and fairly ballsy look at a certain strata of Los Angeles culture — every scene felt straight and candid and well-rounded — and Kutcher gives a fully inhabited, honestly shallow ace-level performance — equal in my mind to Warren Beatty‘s in Shampoo or Richard Gere‘s in American Gigolo — as a guy who finally starts to wake up to the life-is-hard-and-short aspect of things in Act Three.

And Jason Hall‘s screenplay is tart and clean and to the point, and Steven Poster‘s cinematography is luscious and beautifully framed at every turn. Spread didn’t deserve to die in is crib. It’s nothing to write home about, but any movie that has a narrator referring to “six foot tall women who weight 98 pounds” can’t be all bad. it’s a better-than-half-decent film, and certainly worth a rental.

I’d write more but I have to be at an 11 am screening.

An Education, I realize, is delivering its opening week promotional assault, but this Variety-produced video is probably the smartest and best-edited promo piece I’ve seen about this film, and the three or four clips are particularly well chosen. Peter Sarsgaard, especially, delivers a choice quote or two. Scott Feinberg, by the way, has laid out an argument for Sarsgaard being nominated for Best Supporting Actor (along with Alfred Molina).