Absolutely loved roaming around on foot yesterday and re-acquanting myself with the Underground. (It’s been two or three years.) Going on a mandatory junket jaunt to Roald Dahl’s home outside of London, which probably means no filing until I return to the hotel at 6 pm or thereabouts. (Using AT&T air card is out of the question.) This evening’s gathering will be at the Cross Keys in Covent Garden at 9 pm. 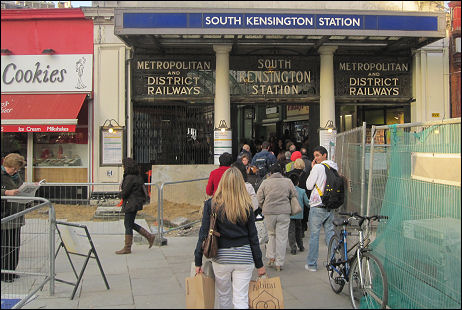 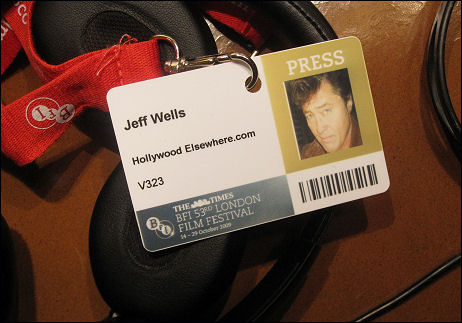 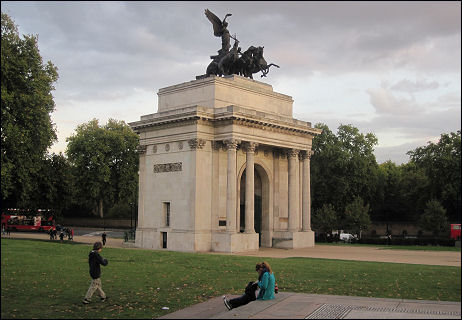 “It’s not the most pleasant thing to force somebody to do it the way they don’t want to do it,” Fantastic Mr. Fox director Wes Anderson says in response to gripes from dp Tristan Oliver (among other co-workers) about (a) having insisted on an unconventional approach to shooting the stop-motion feature and (b) on-set absentee-ism. 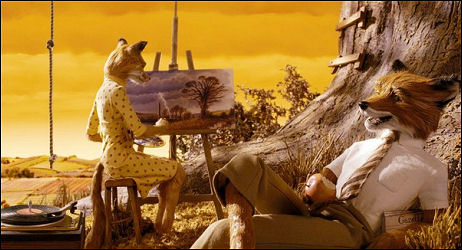 “In Tristan’s case, what I was telling him was, ‘You can’t use the techniques that you’ve learned to use. I’m going to make your life more difficult by demanding a certain approach,” Anderson tells correspondent Chris Lee. “The simple reality is [that] the movie would not be the way I wanted it if I just did it the way people were accustomed to doing it. I realized this is an opportunity to do something nobody’s ever seen before. I want to see it. I don’t want afterward to say, ‘I could have gone further with this.'”

For what it’s worth, if I were directing a stop-motion animation flick I’m not sure I’d want to hang out on the set for weeks and months on end, endlessly futzing with models.

My approval of Jonathan Parker‘s (Untitled) is due (a) to a helpless affection for any ultra-dry comedy that refuses to even glancingly suggest that audiences may want to laugh, (b) a modest primal attraction to Marley Shelton, augmented in this case by a zingy-sparkly performance, and (c) an admiration for dp Svetlana Cvetko, whose work I wrote about in a July 2008 piece about a short film called On A Tuesday.

Last night Variety‘s Michael Fleming reported that Tab Hunter Confidential, a yet-to-be-shot doc about the actor’s closeted life in the ’50s and ’60s, “is being shopped for distribution.” Based on Hunter’s 2005 autobiography in which he first spilled the beans, it’ll be directed by Jeffrey Schwartz and produced by Allan Glaser (Hunter’s partner) and Neil Koenigsberg.

Yesterday’s announcement about Mike Nichols‘ selection as the next AFI Life Achievement Award recipient allows me to re-post a Nichols tribute that I recorded last April at the Museum of Modern Art. It was hosted by MOMA film curator Raj Roy and featured four legendary Nichols collaborators — Meryl Streep, Elaine May, Nora Ephron and Buck Henry.

The biggest problem with strong>Spike Jonze’s Where The Wild Things Are, in the view of Variety‘s Todd McCarthy, “is not the look of the costumed creatures but the manner in which they speak. 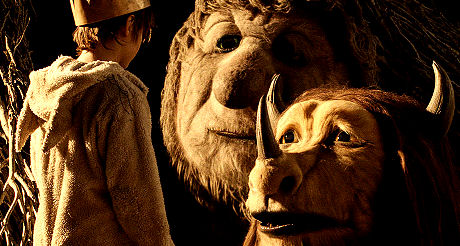 There are fine creative inventions in the film, he adds, “but nothing much is ever at stake, causing a story that begins in dynamic fashion to slowly devolve to the level of fleeting whimsy.”

Things is “fleet of foot, emotionally attuned to its subject and instinctively faithful to its celebrated source, and it earns a lot of points for its hand-crafted look and unhomogenized, dare-one-say organic rendering of unrestrained youthful imagination. But Jonze’s sharp instincts and vibrant visual style can’t quite compensate for the lack of narrative eventfulness that increasingly bogs down this bright-minded picture.”

In a 5.20 riff about IFC’s acquisition of Lars Von Trier‘s Antichrist, I offered the following suggestions: “(a) Don’t market it as a serious film but as a hoot; (b) Make a deal with a toy company to sell battery-powered toy foxes covered with blood and afterbirth that say ‘chaos reigns!’ when you pull their tail; (c) Sell it as something that only the truly freakish of mind can handle — i.e., are you man enough to see Antichrist?”

I’m not aware of any Antichrist foxes having appeared in stores, but IFC has clearly adopted the “hoot” approach to selling the film, to go by this Peter Bruge 10.10 Variety piece. It claims that “chaos reigns!,” a statement spoken by a bloody slow-motion fox during the film, “is fast on its way to becoming this year’s ‘I drink your milkshake!‘

“The graphic tale of a couple coming to terms with their grief divided critics in Cannes but is starting to find a following, thanks to some shrewd maneuvering by domestic distrib IFC Films, which recognized that younger auds and genre fans seemed attracted by the very elements that repelled other viewers.

Particularly iconic was a surreal scene in which Willem Dafoe‘s character stumbles through the primeval brush, where he encounters a fox devouring its own flesh. In what may or may not be a hallucination, the animal tosses its head and snarls the words ‘Chaos reigns.'” Here’s a YouTube link to the full scene.

“‘We’ve been saying it in the office since we bought the movie, so it’s funny that it took off in Fantastic Fest,’ says IFC marketing head Ryan Werner, who sent the clip to a number of blogs. IFC also screened the film at the Austin, Texas-based horror and genre fest, where fanboys latched on to the pic’s aphorism, starting a “chaosreigns” Twitter stream and demanding shirts from the fest’s on-site T-shirt purveyor, Mondo Tees.

“‘We knew things would happen, just because I’ve worked on other controversial movies before like The Brown Bunny, and they kind of take a life of their own once you start throwing stuff out there,’ says Werner.”

Yesterday the Washington Post ran a piece by Neal Karlen about the Jewish heritage of St. Louis Park, Minnesota — the Minneapolis suburb that serves as an existentially hellish setting (circa 1967) for Joel and Ethan Coen‘s A Serious Man. It’s been widely reported, of course, that the Coens grew up there, but so, Karlen reports, did Senator Al Franken, N.Y. Times columnist Thomas L. Friedman and political scholar Norman J. Ornstein.

“Friedman, Franken and Ornstein all angled for parts in the picture, but the scheduling didn’t work out,” Karlen writes.

One of the most bountiful aspects of A Serious Man, I wrote last monh, is the cavalcade of grotesque faces. The ensemble cast out-grotesques Mike Leigh‘s stock troupe by a country mile. Karlen reports that an open casting-call listing for Serious Man extras stated the following: “PHYSICAL LOOK: Specific characteristics represent 1967…ASM is not a ‘glamorous’ film. WE LOVE INTERESTING FACES. The dorkier, the better!”

Arrived at Heathrow this morning at 7:40 am, bought an Oyster card, took the Underground to Hyde Park station and registered at the Dorchester by 10:30 am or so. (Things always take longer than you expect.) I then ordered a pricey breakfast in the salon, sharing a table with the Boston Herald‘s Stephen Schaefer, also here for the Fantastic Mr. Fox junket. I got about 90 minutes sleep on the plane, at most, and am consequently too fried to write anything. So the best I can do for now is simply post photos. 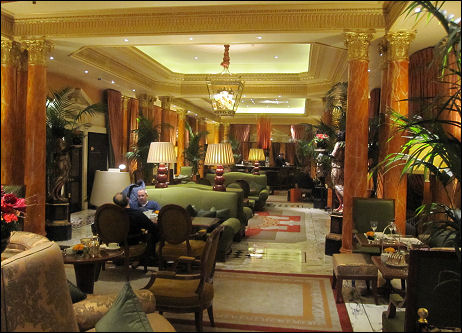 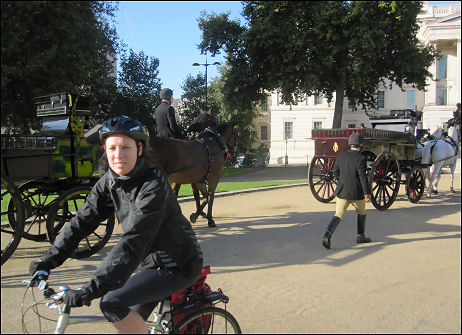 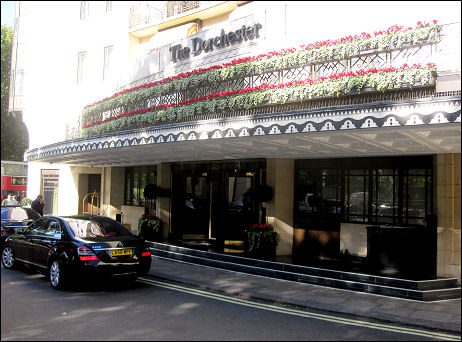 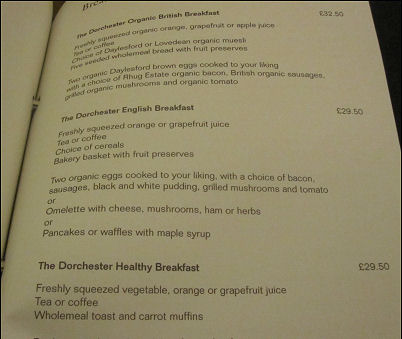 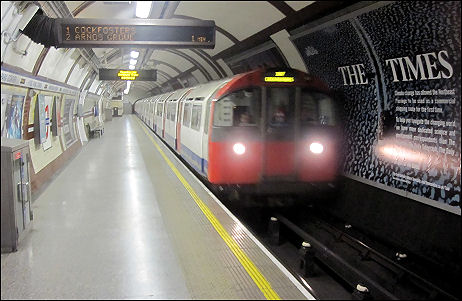 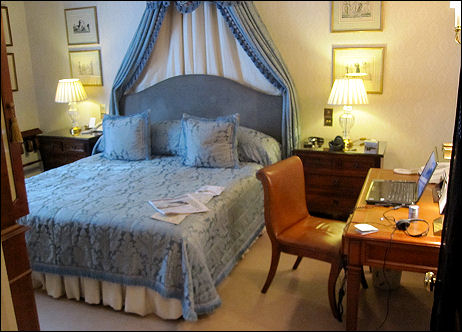 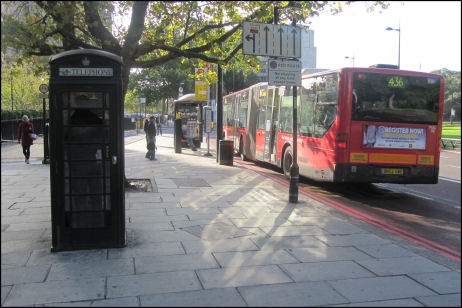