My London adventure also diverted me from Pete Hammond‘s 10.14 “Notes on a Season” piece about Amelia, which asked whether Fox Searchlight has something to hide given the lack of screenings. The answer is that it doesn’t. Amelia isn’t just set in the 1930s but plays, apparently, like a film made with semi-schmaltzy 20th Century chops, which should be an allowable thing. And yet there’s a guarded feeling about it. 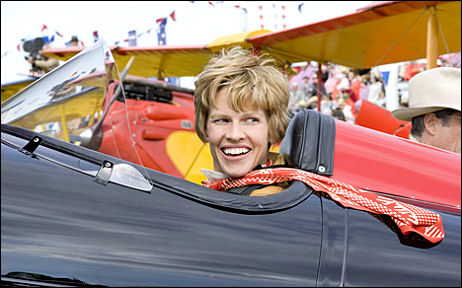 “There were two screenings on the Fox lot Oct. 7 that were projected digitally because film prints were not even ready yet,” ” Hammond reported. “It seems post-production came down to the wire on this one, with director Mira Nair putting the final touches on Gabriel Yared‘s (superb) music score in Paris just a week earlier.

“In reality the film has been a work in progress for some time. And in July a top studio exec very involved in the production told me somewhat ominously that they didn’t think the movie was ‘Academy,’ a statement that immediately put my expectations in check.

“That’s changed. Some added flashback sequences with the young Amelia give the story an emotional layer that apparently make a big difference for many who saw the earlier cuts. A studio source who finally saw the finished film for the first time told me his worst fears were not realized, saying, ‘I didn’t like it, I LOVED it.’ That newfound enthusiasm was shared by other staffers I ran into on the lot who had also just seen it.

“The fact is Amelia is a beautifully crafted and very traditional epic drama that’s aimed at an older, more discerning audience. That’s the kind of crowd that’s slow to show up at the multiplex, but if they do, they will be treated to the kind of fine adult biographical story movie studios generally just don’t seem to be making anymore.

“In some ways Amelia is reminiscent of Out Of Africa, which has the same combination of sweep, adventure and romance this film incorporates. Indeed, if this were 40, or even 20 years ago, Mira Nair‘s meticulously mounted effort would be deemed a front-runner for awards and a certain thing at the box office. But now we live in a post-Slumdog world, and the blueprint for a Best Picture is more likely to favor indie dramas like Precious than the old-style craft of an Amelia.

“So now, while its parent company is more concerned with the more obviously commercial Avatar and the Alvin and the Chipmunks Squeakquel, Searchlight must find a way to effectively sell the kind of faithful biopic that big Fox did so well in the, uh, 20th century.

“Searchlight is a studio used to nurturing quirky unexpected awards contenders like their Oscar babies, Slumdog Millionaire, Juno, The Wrestler and Little Miss Sunshine. With Amelia they suddenly find themselves with an old-fashioned, sweeping Hollywood biography that stars a two-time Academy Award-winning best actress, Hilary Swank (the first of those Oscars ironically came from another Searchlight underdog, “Boys Don’t Cry”).

“The strategy seems to be to let the picture open in about 700 screens and find its audience in the major markets before widening out. If it can hang in there, an Oscar campaign can follow where there would seem to be great potential in nominations at the very least for Stuart Dryburgh‘s stunning aerial cinematography, Yared’s gorgeous score and Swank’s right-on interpretation of Earhart. She definitely has the look and accent down pat (the real newsreel footage Nair incorporates prove that), but she’s even better in the quieter moments behind the controls of the plane — particularly in a suspenseful sequence toward the end where she and her navigator (expertly played by Christopher Eccleston) try to fly their way out of trouble.

“If ever there was a picture that should have great appeal to the older constituency that frequents these screenings, particularly the matinees, this will be the one.

“Whether Amelia even has a chance to fly into the expanded 10 Best Picture list based on box office, critical and Academy reaction is a question Oscar watchers will likely be answering before the end of the month.”