Please ignore that idiotic news story linked to by Movie City News about yesterday’s Tokyo Film Festival screening of The Cove (or more specifically about a letter of complaint from a Taiji fisheries cooperative plus a bullshit threat to sue over suspected “factual errors”). And focus instead on a first-person account of the screening by Cove director Louie Psihoyos, posted a few hours after the screening.

“Today was surreal,” he describes. “Teams of news crews were turned away and banned from the film festival property. The festival planners roped off the green carpet so I had to take an escalator up to the in the screening. It was obvious they didn’t want any more press on The Cove screenings. There wasn’t a single poster up of The Cove around the grounds or the theater. Just a piece of paper taped onto the theater doors saying ‘The Cove.’

“I was shuffled away from the news crews and taken through a series of hallways and warned not to walk around because of protesters. I didn’t see any protesters.

“I had asked to introduce the film, and looking around the audience I saw many of the main characters in our film. Is that Private Space? Look, that’s the Taiji Mayor, and Moronuki. And some of the fisherman [only dressed] in suits? There’s Joji’s predecessor from the Japanese International Whaling Commission Komatsu himself, who is famous for his quote, ‘Whales are the cockroaches of the oceans.’

“I was deep into enemy territory but I was armed with the most powerful weapon in the world — a film.

“The Mayor of Taiji couldn’t get tickets because the screening was sold out, so I had offered him [a] ticket allotment so his city council could attend as well. In the end it was deemed too expensive for them all to come, so I had faxed him an invitation that OPS would screen The Cove for the whole town of Taiji for an Ocean Film Festival.

“The q & a [following] the screening was mostly silent from the dark forces. Really though, how can they defend what they just witnessed?

“Moronuki got to see even more of the killing footage that I flashed to him on my iPhone in the film, but not in context with the rest of the movie. Now there he was, a few rows from the front, smiling blankly like his worst nightmares had become real and everyone in the room had come to share them. That must be what it’s like to be a politician caught on a film taking a bribe. I felt like somebody could have set him in a coffin, folded his hands over his chest, buried him and he wouldn’t have resisted.

“Komatsu, who wrote the definitive book on the Japanese defense of whaling, had his head between his knees and was frantically rubbing his temples as if trying to poltergeist a migraine. If everybody else around him wasn’t in shock, I think they would have gotten him a doctor.

“The mayor of Taiji stormed out like a man in need of a restroom. He didn’t come back. I don’t expect he’ll be following up on the offer of a Taiji Ocean Film Festival anytime soon. Lots of fishermen in nice suits with their lawyers in attendance were slinked down and shielding their faces. There were numerous threats to sue TIFF if the film was shown.

“The question came up, and I said, ‘The dolphin hunters said they were proud of their profession, so what are they afraid of? The Taiji mayor said they only closed off the cove because of danger of falling rocks. I watched the cove for weeks and didn’t see any falling rocks. So I put in some of my own to see for sure.’ That got laughs from the ex-pat community and the mostly sympathetic Japanese community.

“I told the audience that as much as we all feel that the film is about animal rights, the way to win the argument is through human rights. Dolphin meat is toxic, all of it. The meat violates Japanese Health laws, and I called for the new Ministries of Health under the new political party to enforce their health laws. The LDP was in power in Japan for 53 years. Since WWII. A corrupt oligarchy whose four-lane highways to nowhere are the stuff of legend. They subsidized the whaling industry with hundreds of millions of taxpayer dollars. The new government is shutting down those large construction projects, and of course were all hoping whaling gets shut down too.

“I told the audience that if Japan shut down whaling and joined the International community on this issue, their economy would soar. I said whale watching has earned far more money than whale killing has ever made, even when one compensates for the value of money then and now. All whaling and dolphin killing accounts for only 1/10th of one percent of the toothbrush market in their huge economy, but it stains their international reputation to no end.”

For years I’ve watched Heather Graham in this and that, liked or was at least okay with her performances…meh. After catching this YouTube “public option” spot, I suddenly felt with her. Partly the message, of course, and — okay, I’ll admit it — partly the contortionist stretching exercises.

Australian critic Don Groves (whom I know from previous correspondence) has sent along a review of Richard Kelly‘s The Box (Warner Bros,. 11.6): “Richard Kelly‘s Donnie Darko, his 2001 debut feature, earned him a cult following although the opaque drama earned just $1.3 million in the US. Southland Tales, the writer-director’s second feature, bombed worldwide. So will Kelly finally find a hit with The Box, his third attempt at mainstream success? 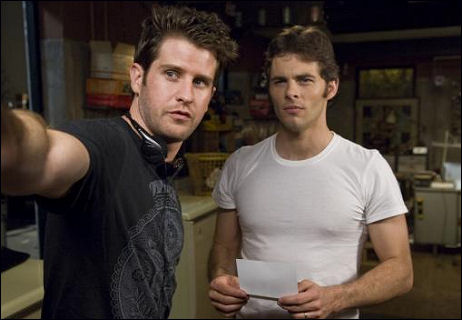 “I strongly doubt it. This period sci-fi thriller (i.e., set in the mid ’70s) suffers from a complete lack of logic and woeful miscasting of the lead roles — and, worse, is almost totally devoid of tension.

“Inspired by ‘Button, Button,’ a 1970s short story by Richard Matheson, the film flounders on its preposterous premise: What would you do if someone offered you a million bucks to press a red button that would cause someone, somewhere — a person you didn’t know — to die?

“Anyone with half a brain would tell the crackpot making this offer to shove the box where the sun don’t shine, but not schoolteacher Norma (Cameron Diaz) and her NASA engineer husband Arthur (James Marsden). They’re short of money, you see, because Norma has just learned she won’t get the employee discount to enable her to keep their son in the private school where she works, she’ll have to postpone reconstructive surgery on her mangled foot, and Arthur’s application to become an astronaut is rejected after he failed the psych test.

“So they toy with taking up the offer from the mysterious Arlington Steward (Frank Langella), an elegantly-dressed, courteous chap with a horribly disfigured face. “I assure you I am not a monster, just a man with a job to do,” he intones gravely. The next day, Norma impetuously presses the button, and, across town in Virginia, a woman is shot dead.

“Steward duly delivers the loot and departs to tempt some other hapless couple. Not once does this well-educated, middle-class couple ask him if anyone died as a result of Norma’s succumbing to temptation. Is that plausible?

“The rest of the movie is an incoherent mess filled with clues, red herrings and non-sequiturs. Random people keep getting nosebleeds. There’s a creepy student, a tormented babysitter, inept efforts by Arthur’s cop father-in-law to investigate these peculiar events, and some psychobabble about the ‘path to salvation.’

“Who employs Steward and has orchestrated his mission? All is revealed, sort of, but little of it makes sense. In essence, Kelly appears to be using a muddle-headed morality play to remind us we’re all responsible for the consequences of our actions. Like, who needs reminding?

“Affecting an annoying Southern accent, Diaz struggles to make Norma seem remotely interesting or worthy of sympathy, despite the predicament she precipitates. Marsden lacks the authority to be believable as a NASA engineer and is barely adequate as a husband and father who’s faced with a cruel dilemma. There is almost zero chemistry between them, which makes it hard to believe they’re a loving couple. Old pro Langella is suitably creepy and menacing, but his efforts are wasted.

“To reflect the 1976 setting, Kelly and his cinematographer Steven Poster drained much of the color, resulting in a cold, flat and uninviting look — rather like the film itself. And was wallpaper of that era really so ugly?”

4 Comments
Back to NYC, Off to LA

Most of my late brother’s business was taken care of yesterday afternoon and evening. I’m tapping this out over breakfast in a folksy ’50s-style diner in Darien, Connecticut. I’m heading back to the city a few minutes with the idea of catching a 1:05 pm Continental flight to LA.

Irate passenger: “Now see here — this ship is scheduled, most definitely scheduled to leave port at 12 midnight!” First mate: “Scheduled, Mr. Helms, but not, I fear, destined to do so.”