I could write a small book about my selection of the 70 best films of the first 21st Century decade (i.e., 2000 to 2009), especially if I explain my reasons for listing each one. But this is just an article so let’s forego the whys and wherefores and get down to brass tacks, understanding, of course, that this is just a 10.5.09 moving-train assessment and 2009 obviously hasn’t played out yet. 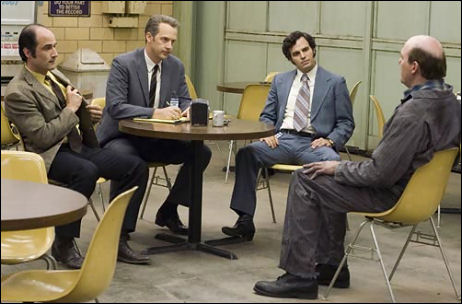 And the brassiest tack of all is David Fincher’s Zodiac — my choice for the best film of the last ten years. (I’m speaking, of course, of the DVD/Blu-ray director’s cut.) Because it plays its game of obsession so exactingly and meticulously and with such staggering confidence, and with nothing but superb performances top to bottom. And because the film takes all this and amplifies it into a kind of infinite hall-of-mirrors equation by being as obsessive as Jake Gyllenhaal‘s Robert Grayson character, if not more so.

But that’s it — I don’t have all day to do this and I can’t and won’t provide summaries of my reasons for choosing all 68 films. Some other time.

The two strongest years of the last decade were 2000 and 2004, with 15 films of a great or near-great stature coming from the former and 14 from the latter. The weakest year of the decade, I feel, was 2008 with only three making the cut. Here’s the rundown, but understand that the films listed for each year are just tossed in and not listed in order of preference:

2007 ( 8 films): Zodiac, Michael Clayton, I’m Not There, No Country for Old Men, There Will Be Blood, The Lives of Others ], 4 Months, 3 Weeks and 2 Days, The Assassination of Jesse James by the Coward Robert Ford, The Orphanage.