“An Education, which was shot by John De Borman and designed by Andrew McAlpine, is a morality tale that often plays like high comedy,” says Wall Street Journal criicket Joe Morgenstern. That’s due in large part to Carey Mulligan. 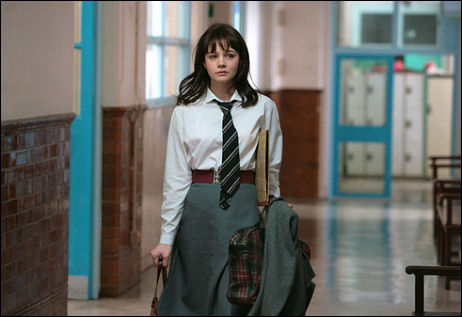 “After seeing the movie last month at the Telluride Film Festival, I wrote that everyone there seemed to be comparing her to Audrey Hepburn. The comparison is irresistible, and not only because Jenny sometimes wears her hair upswept in a Holly Golightly do, or because Hepburn played a young woman opposite an older man in at least three movies — Sabrina, Love in the Afternoon and My Fair Lady. (In five if you count Funny Face and Charade, neither of which dwelled on the age difference.)

“The 24 year-old Mulligan, like Hepburn has a way of endearing herself with little more than a lilting phrase — her speaking voice is as rich as Juliet Greco‘s singing voice — or a flashing glance. But it’s her own way, and she’s her own special edition of a dazzling new star.

“The first time I saw her was almost a year ago, in a superb Broadway production of The Seagull, with a cast that included Peter Sarsgaard as Trigorin; she played Nina, the sacrificial creature of Chekhov’s title. She was electrifying from her first entrance, when Nina speaks of having been in a fever all day, and cries joyously, ‘The sky is clear, the moon is rising!’ Either an actress has the skill to make those extravagant lines her own or she doesn’t, and Ms. Mulligan had skill, and passion, to burn.

“In An Education, where she’s completely convincing as a 16-year-old — the movie was shot two years ago — she has created a complete original. Jenny is, to toss off a French phrase, always on the qui vive; it’s as if she’s listening intently to the life around her for clues about how it works. Both her beauty and her agile mind allow her to be precocious without being insufferable. And she isn’t merely sufferable, she’s admirable for the purity of her responses to culture — Jenny plays the cello as an ardent amateur — if not the clarity of her insights about love.

“When David takes her and a couple of his philistine friends to a concert, she’s the only one who loves the music. (The cello is a magnificent instrument, but I do wish filmmakers would occasionally use another one to signify a lyrical spirit.)

“If purity were Jenny’s main quality, she, and the movie, would be a bore. No danger of that, though, because her motives are mixed, her gift for deviousness is impressive and she, like her semidrab middle-class parents, becomes complicit in a series of choices that may put an end to her dreams of going to Oxford, and bring down the shining promise of her life before she’s ever had a chance to take off.

“The director, Ms. Scherfig, is Danish, but she is manifestly at home working in English. (Her previous English-language features, both highly recommended, are Wilbur Wants to Kill Himself and Italian for Beginners.) Direction can’t be seen, but Ms. Scherfig’s approach makes itself felt in a sparkling stream of felicitous choices. She’s a poet of natural rhythms and intimate insights, and this new film will make her a star in her own realm.

“What it will do for the movie’s star is another matter. One thinks not only of Hepburn, but of Julie Christie bursting upon the world in Billy Liar. That was a very small role, though. Ms. Mulligan is the heart and soul of An Education, and she’s phenomenal. The whole film is phenomenal. I love it.”