Solitary As Opposed to Lonely

“Trailblazers,” a booklet essay by Todd McCarthy inside the forthcoming Downhill Racer DVD, explains the curious mystique of Robert Redford‘s David Chappellet, “a determined loner from Colorado who…singlemindedly pursues the goal of winning with a total disregard for protocols and personal niceties. He’s a heel, a good-looking backwoods hick who hides his ignorance and social unease with a defiant impenetrability. 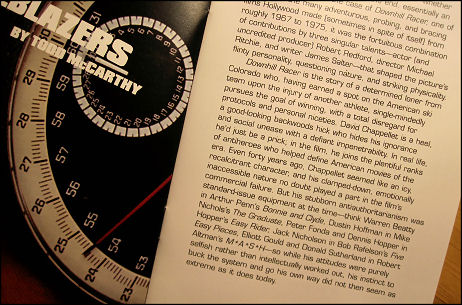 Opening page of Todd McCarthy’s essay about lingering impact and making of Michael Ritchie and Robert Redford’s Downhill Racer, contained in a booklet inside the just-arrived Criterion DVD.

“In real life, Chappellet would just be a prick; he joins the plentiful ranks of antiheroes who helped define American movies from roughly 1967 to 1975. Even forty years ago, Chappellet seemed like an icy, recalcitrant character, and his clamped down, emotionally inacessible nature no doubt played a part in the film’s commercial failure.

“But his stubborn anti-authoritarianism was standard-issue equipment at the time — think Warren Beatty in Arthur Penn‘s Bonnie and Clyde, Dustin Hoffman in Mike Nichols‘ The Graduate, Jack Nicholson in Bob Rafelson‘s Five Easy Pieces, Elliott Gould and Donald Sutherland in Robert Altman‘s MASH — so while his attitudes were purely selfish rather than intellectually worked out, his instinct to buck the system andf go his own way did not seem as extreme as it does today.”

These last two graphs pretty much, sum up what I love about Downhill Racer. which is to say that I’ve always felt a kind of intuitive affinity for Chappellet. It’s clear who and what he is (i.e., a guy who could stand a lot less narcissim in his personality, a lot more in the way of manners and a liberal-arts education) but I’ve always gotten the guy. I understand how he got there, and why he’s not inclined to open up or reconsider his attitude or game plan. I get him all the way down to the marrow.

This prompted me to consider a list of the cinema’s Great Solitary Men. Not lonely guys (which automatically implies a distant angsty condition that a character probably wants to heal with a hug or a girlfriend of a mom or best friend) as much as guys who are more or less content with their aloneness. Guys who seemingly are ready to be and stay that way — unpartnered, uncomforted, self-sufficient, untethered — for the rest of their lives if need be. Not a state of happiness by any stretch of the concept, but at the very least a state of cool comfort that says, “Whatever happens and whatever comes, I’m sticking to me and I’ll be just fine that way because I know and trust myself like no other person on the planet.”

Lee Marvin‘s Walker in Point Blank is one of these guys. Clint Eastwood‘s tough-guy persona of the ’60s, ’70s and ’80s is pretty much built upon the solitary man mystique. Marlon Brando‘s “Johnny” character in The Wild One, I suppose. Montgomery Clift‘s Robert E. Lee Prewitt almost measures up except he’s looking for love from whore-girl Donna Reed so I guess not. Several Steve McQueen characters (i.e., in Hell Is For Heroes, Bullitt, The Sand Pebbles) fit the mold. We’re talking about an awfully long list here.