Everyone had heard or suspected that Mira Nair‘s Amelia would be bad, but I was nonetheless stunned by the boredom and general flatness that leapt — seethed? — out of every scene and frame. Ron Bass and Anna Hamilton Phelan‘s script is amazingly drippy and mundane. The roteness of Nair’s direction is suffocating. This is probably the last American-funded directing gig she’ll have in a long time. Put her in movie jail and throw away the key. 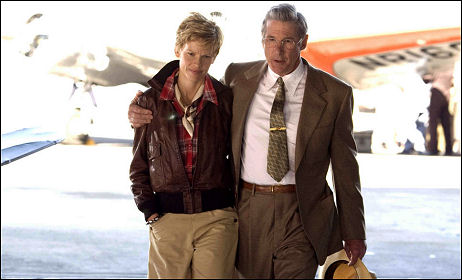 Call it a mildly agreeable time-waster if you want, but if you truly enjoy Amelia or even express a degree of genuine enthusiasm — “Not too bad! Nice aerial photography!” — there’s really something wrong with you. With your taste buds, I mean. Amelia is a film diseased and poisoned and deadened with schmaltz. It’s a major embarassment all around.

Hilary Swank‘s performance as the legendary aviator is mildly okay in itself (it’s mostly about her white teeth) but she’s trapped in a lethally dull film so she goes down with the ship regardless. Richard Gere‘s George Palmer Putnam — the suave money guy who married Earhart — is also mildly acceptable. Ewan McGregor‘s Gene Vidal, an aviation instructor and would-be infidel, reminds you McGregor has a nose for crap and opportunities for career deflation.

How did Fox Searchlight, an operation synonymous with smart classy films and clever, aggressive marketing campaigns, get saddled with this thing?

I heard mild moanings coming from a critic sitting behind me at last Monday’s screening on 55th Street, and I heard at least two throat-clearings from other critics sitting nearby.

The Envelope‘s Pete Hammond recently wrote that “in some ways Amelia is reminiscent of Out Of Africa, which has the same combination of sweep, adventure and romance this film incorporates.” Be careful, Pete! The ghost of Sydney Pollack has read that line and is now on the haunt, looking for you.

Hammond also claimed that “if this were 40, or even 20 years ago, Nair’s meticulously mounted effort would be deemed a front-runner for awards and a certain thing at the box office.” No, it wouldn’t. Dramatic mediocrity has been a recognizable thing for centuries, and no self-respecting Oscar handicapper in the late ’60s or late ’80s would have given Amelia a shot at anything, even out of politeness.

The Hollywood Reporter‘s Ray Bennett, who damaged his cred when he raved last year about Mamma Mia, recently claimed that Amelia “ranks with recent real-life portrayals of Ray Charles by Jamie Foxx and Truman Capote by Philip Seymour Hoffman and could be similarly awards-bound.”

Bennett added that “the classically structured bio will appeal to grown-ups, history buffs and lovers of aeronautics, but in showing how the flier was one of the most lauded celebrities of her time, it also might appeal to youngsters.” The mind reels!