I had a brief but pleasant chat yesterday afternoon with Elizabeth Redleaf and Christine Kunewa Walker, the co-founders of the Minneapolis-based production company Werc Werk Works. They’re basically into using private-equity funding (drawn from the coffers of their rich pallies in Minneapolis) and financing arthouse movies at a price. I didn’t ask them what that price is exactly, but figure something low. (Or…you know, kinda lowish.) 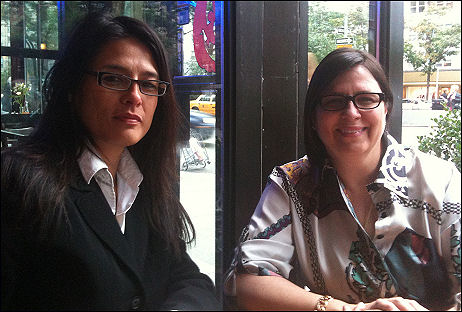 At one point I mentioned the financing philosophy of producer Robert Evans , which is basically that talent needs to take a little upfront but primarily be ready to gamble. If the film works out, we’ll all make out and if it doesn’t…well, there’s always the next one. Or words to that effect. One of the partners (I forget if it was Redleaf or Walker) said they’re more or less operating according to the Evans plan.

They’ve made (i.e., largely financed and produced) three films so far — Todd Solondz‘s Life During Wartime, Rob Epstein and Jeffrey Friedman‘s Howl and Bela Tarr‘s The Turin Horse. And they recently announced a fourth — Jill and Karen Sprecher‘s The Convincer, about “a salesman who seeks to acquire a rare musical instrument,” according to a trade announcement.

These are basically upscale wine-and-cheese movies, which Redleaf and Walker are obviously into. Minneapolis is a very hip and liberal town and these two are very much woven into that fabric, and they’ve figured out a way to finance films of this stripe in a way that makes financial sense, and…hey, that’s cool. And “wine and cheese” is not a perjorative term. It simply means movies attuned to educated people with seasoned taste buds. (The three-toed sloth who lives above my place wouldn’t touch any of their films with a ten-foot pole, and good for that.)

I can’t honestly say I’m a huge cartwheeling fan of Life During Wartime, but I know what Howl is (i.e., about Allen Ginsberg‘s famous ’50s poem and the obscenity charges he faced because of it) and I’m a big fan of James Franco (who plays Ginsberg) and I know about the aesthetic tendencies of Bela Tarr so I think I get it. Refined serious-edgy stuff and no popcorn pablum…right?

It’s a very tough world out there now and a lot of producer-financiers are on shaky ground or have been knocked out of the game altogether, but Werc Werk Works is well-planted and viable and committed and all that other good jazz.

They first met through the Walker Arts Center Film Society in Minneapolis, which Redleaf founded a few years ago and which functions as a kind of Lincoln Center-esque institution. Redleaf is also a member of the Telluride Film Festival board and serves on the IFP Minnesota board. Walker wrote and produced Older Than America, produced Factotum and line-produced American Splendor, which won the Grand Jury Prize at the 2003 Sundance Film Festival and the International Critics Award at the Cannes Film Festival.

Yesterday I was having trouble remembering their production company’s name, to be honest. I was trying to think of it as I rode uptown on the IRT to meet them at a place on Broadway and 69th. I knew it was three variations of the word “work” but I just couldn’t remember which one has a “c” and which has a “k” or whatever, but it’s starting to stick to the grooves in my brain. I get the game. I’m down with the program.