Maggie Gyllenhaal‘s Crazy Heart performance works for everyone and then some, but is it leading or supporting? I saw it as supporting from the get-go, which didn’t strike me as a problem in the least. The Fox Searchlight guys were feeling differently about this a week or two ago, but maybe they’ve come around.

I shot this with my Canon Elph. Bit of a strange angle but I had to keep it close to pick up her voice. There’s a lot that goes into assembling a decent video interview piece. I have to remind myself not to shoot ones that go on for 30 or 40 minutes. It took forever to load and convert this sucker to mp4 and then cut it up into three portions. I’ve got enough aggravation as it is, and now I’m late for my Thanksgiving dinner. 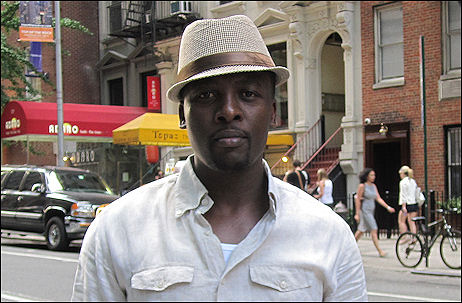 The Weinstein Co. is pushing Marion Cotillard‘s Nine performance in the Best Actress category. She has the meatiest, hurting-est role among the Nine women — i.e., the betrayed wife of Daniel Day Lewis‘s Guido. (She’s also a lead because she sings two songs while all the other actresses sing one.) But nothing she does in Nine comes close to her acting in this scene from Public Enemies. I’m sorry but it’s true.

Three and a half days before the 11.30 embargo date, Newsweek‘s David Ansen has posted a short review of Clint Eastwood‘s Invictus. Does this mean others will jump the gun and post today or tomorrow or this weekend? A respected icon like Eastwood has little to fear from traditional big-gun critics like Ansen. Their respect for him is such that they’ll always go easy if they’re not 100% delighted. That said…

“A number of sports movies have one-word titles (Rocky, Hoosiers), but they’re not usually in Latin,” Ansen begins. “Clint Eastwood’s Invictus is not your ordinary sports movie, though it comes to a rousing climax at the 1995 Rugby World Cup match between South Africa and New Zealand. The stakes are higher: a nation’s unity hangs in the balance.

“Invictus (which means ‘unconquered’) takes place at the intersection of sports and politics. Its hero is Nelson Mandela (Morgan Freeman, naturally), who, in the aftermath of apartheid, has just been elected South Africa’s president after serving 27 years in prison.

“During his incarceration, Mandela studied his Afrikaner enemies and was wise to the role sports played in the national psyche. South Africa’s less-than-sterling rugby team, the Springbok, was as beloved by whites as it was despised by the black population, to whom it had become a symbol of oppression. Yet Mandela, taking a huge political risk, refuses to give in to his supporters’ demand that the team be dismantled and renamed.

“To do so, he sees, would only stoke fear and racial paranoia in the Afrikaner population. Enlisting the team’s captain (Matt Damon) to his side, Mandela challenges him to turn its losing ways around. His goal is to use rugby to bridge the racial divide in his country.

“Invictus is not a biopic; nor does it take us deep inside any of its characters — Eastwood views Mandela from a respectful middle distance. It’s about strategic inspiration. We witness a politician at the top of his game: Freeman’s wily Mandela is a master of charm and soft-spoken gravitas. Anthony Peckham‘s sturdy, functional screenplay, based on John Carlin‘s book Playing the Enemy, can be a bit on the nose (and the message songs Eastwood adds are overkill). Yet the lapses fade in the face of such a soul-stirring story — one that would be hard to believe if it were fiction. The wonder of Invictus is that it actually went down this way.”

I’m inclined to respect the embargo unless the dam breaks, in which case holding back won’t matter.