The 2007 blowoff of Benicio del Toro‘s landmark performance in Things We Lost in The Fire by critics groups, Oscar pundits and Academy members is one of the most shameful (certainly incomprehensible) wrongos in the history of award-season politicking and handicapping. The people who ignored Del Toro’s work as Jerry the junkie will one day have to stand before the Movie Godz with bowed heads and explain themselves, which will surely be a painful thing all around. 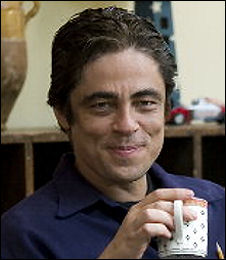 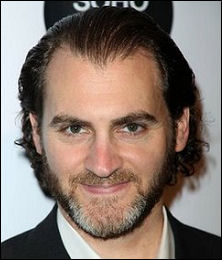 Benicio del Toro in Things We Lost in the Fire; Michael Stuhlbarg as he doesn’t appear in A Serious Man.

I’m wondering now who will get Del Toro’ed this year? Life can be unfair and sometimes cruel, especially on the awards circuit. Who will fate slap down with nary a glance?

I’m sensing right now that A Serious Man‘s Michael Stuhlbarg might be a candidate. (I’m telling myself I shouldn’t mention this for fear of this piece being misinterpreted as a flat-out prediction of same.) I know for certain that Stuhlbag’s performance will be one day be savored as a delicious bit of tonal balancing. His persistent and yet faintly farcical performance is of a different flavor and dimension that Del Toro’s in Fire (which I feel, no offense, is a greater achievement), but it is arguably a more difficult thing to have gotten right. Every second Stuhlbarg is on-screen he seems to be simultaneously acting in a farce and a hellish deadpan tragedy, which of course is what A Serious Man is.