A Hurt Locker q & a was moderated last night by director-screenwriter Tony Gilroy following a 6 pm screening at Manhattan’s DGA theatre. (l. to r.) Gilroy, Hurt Locker director Kathryn Bigelow, screenwriter Mark Boal, costar Anthony Mackie, and…I’m sorry but I didn’t write down the name of the bearded guy on the right. It could have been producer Nicolas Chartier or associate producer Jack Schuster or producer Greg Shapiro. No disrespect intended.

It’s been 14 months since I first saw The Hurt Locker at the ’08 Toronto Film Festival. And it’ll be a topic of interest for the next three and a half months, presuming it gets nominated for Best Picture, Bigelow gets nominated for Best Director, and Boal snags a Best Original Screenplay nomination. (Which will probably happen.)

“Set in Baghdad and the full maelstrom of that godforsaken conflict, this is a full-power throttle, nail-biting, bomb-defusal suspense film that gradually becomes a kind of existential nerve ride about the risk and uncertainty of everything and anything,” I wrote on 9.8.08. “The Hurt Locker is absolutely a classic war film in the tradition of Platoon, The Thin Red Line, Pork Chop Hill, Paths of Glory and the last 25% of Full Metal Jacket.” 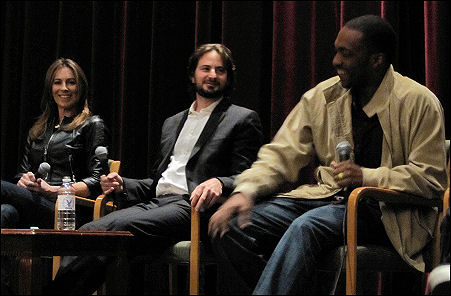