Somebody said something the other day about Alec Baldwin being exceptional in Nancy Meyers‘ It’s Complicated (Universal, 12.25). The vested parties are saying this, of course, with the post-marital comedy expected to start screening for critics sometime after Thanksgiving. A non-vested writer-director guy told me this afternoon that he can “absolutely confirm” that Baldwin is the shit in Meyers’ film and a prime candidate for Best Supporting Actor. A vested party who nonetheless tends to be blunt said Baldwin is “a lay-down hand for a nom, Jeff. And he could win. Total breakout performance. Bet on it.” 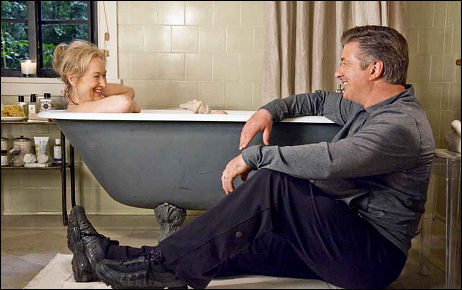 Whatever the truth, it hit me suddenly that it’s taken Baldwin 15 years to recover from the downish career dents he suffered in the ’90s — sacrificing a movie-star career and the Jack Ryan franchise for a chance to play Stanley Kowalski in a Broadway Streetcar, the messy divorce from Kim Basinger and the daughter tape, getting thicker and thicker, developing the angry guy rep, being called “the Bloviator” by the N.Y. Post, etc. — and to find his kwan and ease into a nice smooth groove over the last two or three years with 30 Rock and whatnot, and that some kind of favorable karma thing is kicking in now with his acting in It’s Complicated and co-hosting the Oscars with Steve Martin and so on. I’m just feeling a little vibe telling me it’s Baldwin’s time right now and that the winds are favoring.

The non-vested director-writer said that “besides Baldwin, It’s Complicated is also a very strong showing for Steve Martin. A nice rebound after the last Panther movie and something more in tune with his talents. Part of the fun of having Baldwin and Martin host the Oscars is the possibility of one or both of them being nominated. It’s a strong film and Universal will have a much-needed crowd pleaser. Meryl could be a lock as well for Best Actress, with the Julia Child performance being pushed for supporting.”

The only thing that gives me concern is my bedrock certainty that however satisfying and entertaining her films may be on a certain level, Nancy Meyers doesn’t want to be anything more than Nancy Meyers. She doesn’t seem to want to push herself up to the next level and be the James L. Brooks of the ’80s and early ’90s (i.e., before he lost it). I’ve said this before, but she can’t stop making movies about people with money who have shiny copper pots hanging in the kitchen.