Gone With The Wind Reborn

I’ve just watched the first half of the new Gone With The Wind Bluray, and I’m truly dazzled. No, levitated. This is by far the most beautifully rendered old-time Technicolor film I’ve ever seen on a high-def system — razor-sharp, pulsing with color, pretty close to grain-free and significantly upgraded over the 2004 DVD version, which was excellent for what it was.

I haven’t talked to Robert Harris or George Feltenstein or anyone else in the know, but I do know what my eyes tell me. This Gone With The Wind is amazing — a candy-store Technicolor eye-bath like nothing I’ve ever sunk into before. The key element is “next to no grain.” I haven’t come up with a term that conveys the opposite of a “grainstorm” but this delivers that. Hallelujah — somebody finally heard!

The grain levels are roughly at par with WHV’s Casablanca Bluray, which didn’t have a digitally scrubbed-down look but a naturally clean quality. Why didn’t WHV deliver the same nearly-grain-free quality (or an approximation of same) in the sepia-tone sections of The Wizard of Oz?

My approving-but-not-exactly-blown-away reactions to Warner Home Video’s other two “Murderer’s Row” Blu-ray titlles — Oz and North by Northwest — led me to expect that GWTW would be of a similar quality, which is to say noticably but not mind-blowingly better than the last DVD. Riper, sharper and more fully rendered, okay, but not in a way that would make anyone gasp or drop their pants. Well, the GWTW Blu-ray is a serious gasper and pants-dropper.

That’s all I’m going to say for now except that for my money DVD Beaver’s Gary Tooze was too restrained in his recent review of this disc. He said that “there are times when it makes you gasp” and that “detail advances to as high a degree as we are likely to see for this 70-year old classic,” okay. But he didn’t convey sufficient excitement. He didn’t jump and down and say “this is the kind of Blu-ray of a Hollywood golden-age film that you’ve always dreamed of but not never quite saw.” 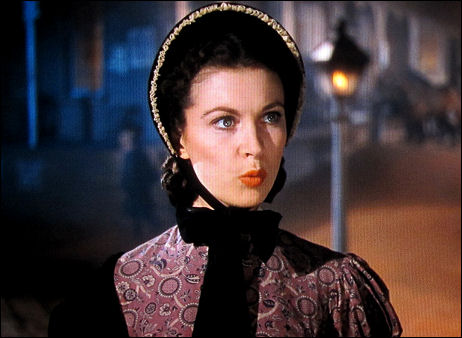