Their most striking similarity between Werner Herzog‘s about-to-open Bad Lieutenant and Abel Ferrara‘s 1992 original “is that each stars an actor whose performance is so intensely played and thoroughly inhabited, it can feel like psychosis, possession, a bit of both,” N.Y. Times critic Manohla Dargis wrote yesterday. 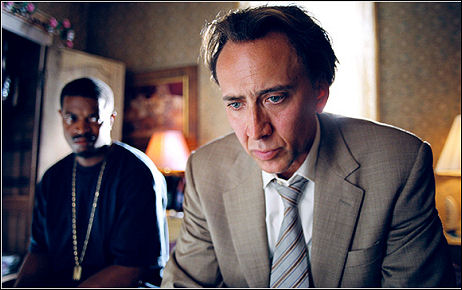 “They’re performances that make you wonder where the character leaves off and the man playing him has taken hold, a slippage that can lead to greatness, but also to moments of such excess and even grotesque comedy that they leave you squirming. Nicolas Cage revels in that slippage, though it was only after seeing Bad Lieutenant that I was reminded of how freaky he can be — and how exhilarating it can be to watch an actor go far and then just a little too far.”

So is Dargis saying that Cage perhaps isn’t “acting” as much as you might think he is and therefore isn’t really delivering a performance as much as exploring a form of on-camera psychotherapy, which isn’t necessarily the sort of thing that might result in a Best Actor nomination? Or that Cage is venturing into new territory by giving a kind of performance that is more than just “acting” although he is, obviously, playing a New Orleans detective on the ragged edge?

Should Cage’s Bad behavior, in other words, be primarily processed by the fact that he’s not playing a character as much as being queerly and flamboyantly meta? Or should we all just kick back (Manohla included) and just say “whatever…he’s acting and he isn’t or he is and his therapist is in on it…don’t worry about the machinations.”