It’s hard to define what makes an appealing movie poster, but the one for Michael Tucker and Petra Epperlein‘s How To Fold A Flag just “does it right” on some level. One look and I said to myself, “I want to see this.” It makes what is clearly a left-humanist portrait of Iraq War veterans seem very plain and true and backyard American. Who’s the artist or agency, I wonder? 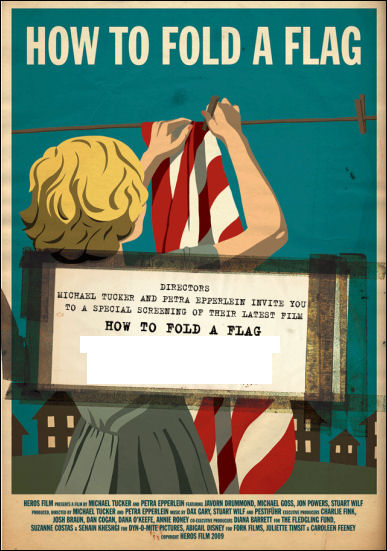 “With How to Fold a Flag, a diffuse yet fascinating account of four U.S. Army vets readjusting to civilian life, documakers Michael Tucker and Petra Epperlein continue their sympathetic, insightful examination of individuals involved — as soldiers or civilians, willingly or otherwise — in the Iraq War,” Variety‘s Joe Leydon wrote from Toronto last September.

How to Fold a Flag: in theaters 2010 from Nomados Film on Vimeo.

“Unlike The Prisoner or: How I Planned to Kill Tony Blair or Bulletproof Salesman Tucker and Epperlein’s latest effort comes across as a kind of sequel to their 2004 debut feature, “Gunner Palace, which focused on soldiers of the 2/3 Field Artillery unit assigned to one of the volatile areas in post-Saddam Baghdad.

“Pic does suggest that each of its subjects will survive, and maybe even thrive, as they continue to distance themselves from what they did, and what was done to them, in Iraq. But for some of them, full recovery is a distant, albeit attainable, goal.”