Pamela Ezell‘s 11.27 Huffington Post Invictus piece notes several parallels between former South African president Nelson Mandela and U.S. president Barack Obama. First black president, humble backgrounds, preachers of tolerance and forgiveness despite haters, etc. But the Mandela-Obama parallel falls apart in Clint Eastwood‘s film when Morgan Freeman‘s Mandela is told he’s risking his political capital, and he replies “the day I am afraid to do that is the day I am no longer fit to lead.” 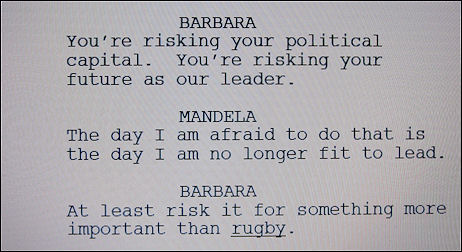 Is there anything less Obama-like than a core belief that a leader must sometimes risk much if not all in order to get the right thing done? Has there ever been a president with less backbone — with more of a mushy cottonball approach to leading and using power than Obama? Has there ever been a president who’s been less inclined to take any risks whatsoever? Who’s been more willing to bend over and defer to his enemies and say to the worst scummiest Republicans, “Hmmm…okay, maybe you guys have a point”?

Here’s another line that Mandela says in the film: 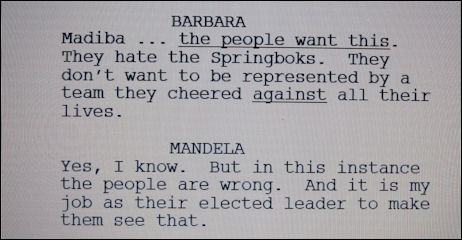 It’ll be an ice-cold day in hell when Barack Obama says to a White House adviser, “In this instance the people are wrong, and it is my job as president to make them see that.” The mantra of Barack Obama is, “We know what to do and we know what’s right, but it’s better to cave in and get along because that way our poll numbers will be steadier. Because…you know, I can’t afford to be seen as an angry black guy. I don’t have that authority that Franklin D. Roosevelt had when he became ‘a traitor to his class.’ The right is too powerful and there too many crazies out there. It’s all I can do to chill them out.”