A fundamental reason why so many people of taste and refinement have been talking with great admiration about Peter Capaldi‘s In The Loop performance as the sewer-mouthed Malcolm Tucker is due to envy and dream-fulfillment. Capaldi’s tirades have not only made him a dark-horse contender for a Best Supporting Actor nomination but instructed (or reminded) some of us that profanity can be artful — it can be delivered with absolute precision and beauty. You just need a team of brilliant writers feeding you the lines. 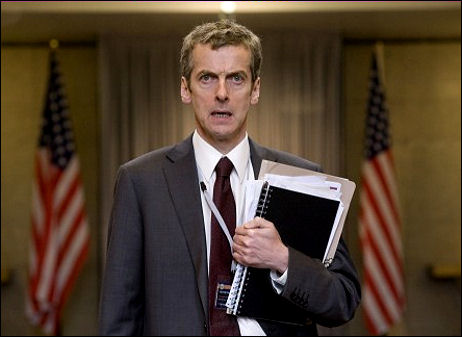 In The Loop‘s Peter Capaldi

Swearing can be emotionally cathartic for the speaker, but it’s almost always ugly for the listener. Which is why Capaldi’s imaginative and vigorous motor-mouthing in In The Loop is such a trip. Most if not all of us sound coarse and ill-mannered and pathetic in a 15 year-old boy sort of way on those rare occasions when we swear about something or someone. It would be wonderful — bliss! — if we could swear like Tucker on occasion, or even just once.

The Loop artisans and masons, of course, are the writers. Capaldi just makes their stuff sound right, but of course that’s what all acting basically is, isn’t it? Yesterday Dark Horizon‘s Paul Fischer posted an interview with Capaldi that went like this at one point:

Fischer: “Now, this film is as much about language as it is about character. I’m just wondering how much input did you have into the way that he speaks? I mean – and his use of language. Was there any improv at all, or was it all there on the page?”

Capaldi: “It’s largely all done on the page, particularly with Malcolm, because the writers take a lot of time and put a lot of labor into constructing for him, very, very baroque sentences, and ways of speaking. So, my job is to sort of do a congenial check, to make it look as if this highly-polished text is just tripping off my tongue. So – yes, there’s always a gray area.

“[Actors] throw in bits and pieces. How we do the show, or how we did the film, which is the same way we do the show, is that we nail the text. That’s our first responsibility. We shoot a couple of passes where we nail the text. And thereafter, we’re allowed to do sort of rougher versions, where we can loosen up and throw in our own words, if we like. And also, throughout the process, we have days when we improvise around the material. And sometimes a line or whatever comes up that works, and the writers put that into the shooting script. But I wouldn’t — you know, I would say it’s their work, largely.”