“There are moments” when Warner Home Video’s new Gone With The Wind Bluray “simply looks ‘better’ than the previous DVDs,” says DVD Beaver’s Gary Tooze, “and then there are times when it makes you gasp. Most notable may be the colors — flesh tones are warm at times but lose that yellow-orangey look of the SD transfers. Detail advances to as high a degree as we are likely to see for this 70-year old classic.” 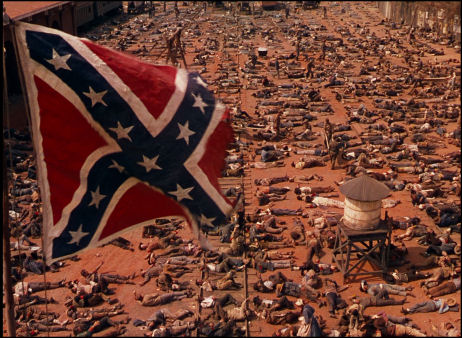 The GWTW Bluray streets on 11.17. I haven’t received a copy myself but then again I’m at a new Brooklyn address.

“Whites are whiter (no longer creamy), blacks are pitch and the dual-layered, 44 Gig transfer of this almost four-hour film shares the disc with only the Rudy Behlmer commentary and some extensive foreign language dubs and subtitle options.

“Gone With the Wind‘s enormity is half the experience and it’s big here — very BIG. Contrast and lighting visuals have some jaw-dropping moments and I can’t imagine it looking any better for your home theater enjoyment. There is less grain that I would have thought but I don’t feel there was an over-abundance of digital manipulation, and it is smooth in motion.”

Tooze doesn’t mention that his screen-grab comparisons indicate that the Bluray offers slightly more picture information on the sides than the previous standard DVD issue of this 1939 mega-classic. Look closely and you’ll see extra info on both the left and right sides of the Bluray captures.

It can’t be overstated that while Gone With The Wind is nominally about the agonies caused by the Civil War in the 1860s and the deprivations of Reconstruction from 1865 through the late 1870s, it is at heart a portrait of the sufferings Americans went through during the Great Depression of the 1930s. Which links to today, in a sense, in that most Americans are grappling with the bite of the Great Recession, despite recent cheering by the elite Wall Street crowd that the hard times are pretty much over. For them, maybe.