I want to hear Michael Bay dissing Avatar composer James Horner right back on his website within 24 hours. Actually, make it twelve hours. The cycles on these things are getting faster and faster. You can’t sit around and drink tea and read Faulkner on your patio for fear of missing the latest who-whatta?

LA Times‘ Geoff Boucher: “It’s interesting, too, that small moments become so key when a movie gets as big as this one. The machinery of the movie is so big that without successful small moments and human emotion, it could turn into a video game.

Horner: “Absolutely. Yes, that’s right. And, not to mention names, but if it was Michael Bay making this movie we wouldn’t be having this conversation. These things, [heart, story, soul], wouldn’t matter or they certainly wouldn’t matter as much. Jim Cameron knows the importance of it not just becoming mecha. Jim knows that a movie can become swamped in just unbelievable imagery and that it becomes hollow. Jim won’t allow that and my job is to make sure it doesn’t happen.”

“You won’t find a more devoted supporter of the Bourne franchise than me,” says departed Bourne director Paul Greengrass in a prepared statement. “I will always be grateful to have been the caretaker to Jason Bourne over the course of The Bourne Supremacy and The Bourne Ultimatum. I’m very proud of those films and feel they express everything I most passionately believe about the possibility of making quality movies in the mainstream.

“My decision to not return a third time as director is simply about feeling the call for a different challenge. There’s been no disagreement with Universal Pictures. The opportunity to work with the Bourne family again is a difficult thing to pass up, but we have discussed this together and they have been incredibly understanding and supportive. I’ve been lucky enough to have made four films for Universal, and our relationship continues. Jason Bourne existed before me and will continue, and I hope to remain involved in some capacity as the series moves on.”

Every time the Sundance Film Festival announces their competition slate, I respond with one of those blah-blah, gee-this-seems-interesting, well-maybe-not-because-most-of-the-descriptions-seem-boring, blah-dee-blah, I-don’t-actually-have-anything-to-say pieces. This time, however, I forgot the power cord and I’m in a Starbucks on Eighth Avenue and there’s only about 20 minutes left so I can’t really go to town. But some of the stand-outs are as follows:

(1) Blue Valentine, directed and co-written by Derek Cianfrance, with Ryan Gosling, Michelle Williams, Mike Vogel and John Doman costarring. Relationship drama of some mild interest because of Gosling and Williams, but I’m not holding my breath. I don’t know why I just said that.

(3) Happythankyoumoreplease, directed and written by Josh Radnor. “Six New Yorkers negotiating love, friendship and gratitude when they’re too old to be precocious and not yet fully adults.” I smell a mumblecore movie. Is that what it is? If it is a mumblecore film why don’t they just say that and stop plotzing around? And if you can’t say “mumblecore” any more, what term is everyone supposed to use as a substitute?

That’s it…the battery is going. I’ll be dead in 90 seconds.

Universal had it right with the Emily Blunt Wolfman poster, going the suggestive/subtle route. And then, I’m guessing, some marketing guy said, “Uhhm, I hate to mention this but surveys are showing this Blunt poster isn’t doing well with the dumbasses…we need to punch things up.” And so they did. Just a guess. I do know that I didn’t see the right-side poster until recently. 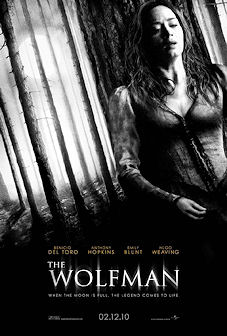 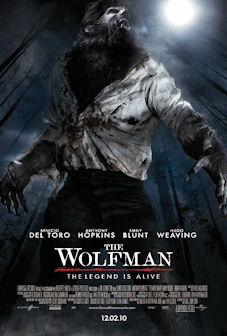 “Keep in mind something I was recently told,” a friend writes, “which is that Universal doesn’t officially have a marketing department now as no one really and truly replaced Adam Fogelson in the job. So the marketing executive is now head of the studio calling all the shots about this stuff. That poster not only represents his direct personal taste, but how they’ll sell the movie which they’re now shaping as something for the Saw audience as opposed to ‘classic gothic horror.'”

Last night HE reader Aaron Lindquist saw Don Hahn and Peter Schneider‘s Waking Sleeping Beauty, a doc about the re-emergence of Disney animation from the time of ’84’s The Black Cauldron to ’94’s The Lion King, at the Art Center College of Design.

Despite an ’09 Toronto Film Festival pan by Variety‘s Rob Nelson, Lindquist calls it “amazing film” that “seems to bring closure to much of the animosity between Michael Eisner, Jeffrey Katzenberg and Roy Disney.

“Their interviews were incredibly candid and filled with dimension, and about such an important period of their lives.” he writes. “It seemed a very honest account of Disney Animation from 1984 to 1994 and the work that went into those films and the struggles that went on behind-the-scenes.

“Hahn and Schneider were there for a q & a afterward and mentioned it would be playing at MOMA soon. I highly recommend it if you get the chance.

“The title alludes to Disney animation going from its nadir (like Sleeping Beauty falling under the spell) with the release of The Black Cauldron to its pinnacle with The Lion King. The doc covers the transition of Disney from the failing Ron Miller days to the Eisner-Wells-Katzenberg era and the challenges and triumphs of the animation department throughout that time.

“They literally went from almost being excised from Disney to being the reason the brand endures. All of the footage was shot by Disney employees (John Lasseter among them) over the years, in defiance of strict corporate policy. Not always high quality images, but incredibly candid stuff.

“From what they said at the q & a it seems like Disney is giving it a small release (five theaters) and will then quietly release it on video, which I think is a shame because it’s a really good film. I think there are a lot of people who would be interested to see Eisner, Katzenberg, and Disney in a human light because all they’ve seen is the media spectacle. Here’s the film’s Facebook page.”

President Barack Obama‘s West Point Afghanistan speech last night reminded us once again that the right runs this country. It sure as hell knows how to crack the whip and prompt Commanders in Chief, young or old and of whatever party, to get out the old sheet music and sing the old hymns. And the Bush Jail guards are delighted because they know they’ll never be out of a job.

As we all know the tragedy of 9/11 wasn’t a single ghastly occurence, but a match that lit a fuse that still burns and looms large. It triggered a mandate and a rationale for a never-ending war with Islamic yahoos who may want to one day attack this country with more domestic terrorism. For as long as the 9/11 fire alarm continues to clamor in our heads, we will be inmates in Bush Jail. Because guys like Barack Obama can’t finally think of anything to say or do except “kill the Islamic wackos and keep killing them until further notice.”

As long as we believe, in short, that the proverbial “Wily Pathan” (as Richard Lester‘s How I Won The War describes him at 5:40 in this clip) is constantly plotting to bring more terror to our shores, there can be no end to it.

The only way to win the war against Middle Eastern terrorism is to kill every U.S.-hating Islamic wacko and every last one of his sons and cousins, and then bury them all in a huge mass grave in the desert. And even then we wouldn’t be safe. Because there is no such condition. So we’re in jail for life. No one is leaving.

The 28th Amendment, the still-unmade thriller about a young U.S. president who discovers the existence of a secret cabal that runs (and has always run) the foreign policy of the government, is not fiction.

I’m perfectly fine with the pace of the subtitled narrative in Matt Zoller Seitz‘s video essay about Clint Eastwood‘s career-long theme of revenge, called “Kingdom of The Blind.” Some have said it moves along too fast but not for me. MZS has nonethless said he’ll be launching a version later today (possibly by noon) that will be friendlier to readers who prefer a slower pace..