I was slapped around two or three days ago for putting on my realist hat and predicting that The Blind Side would be a Best Picture nominee. This weekend’s box-office tallies have made it clear that this Christian catnip football saga is going to easily top $200 million, and this clearly makes The Blind Side an ideal recipient of a gimme nom — a “people” movie that the expanded Best Picture nomination slate was clearly created for.

“I saw on YouTube the video comparing [Delgo and Avatar] side by side. I thought, wow, there are a couple of moments that are pretty compelling. Do I think there is much of a comparison? Clearly there is. [But] I think the comparison was too literalized. You can take a bunch of stuff and spin it to whatever you want.” — Avatar creature designer Neville Page speaking to L.A. Times guy Gerrick Kennedy. 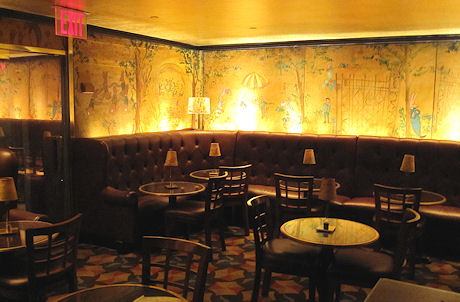 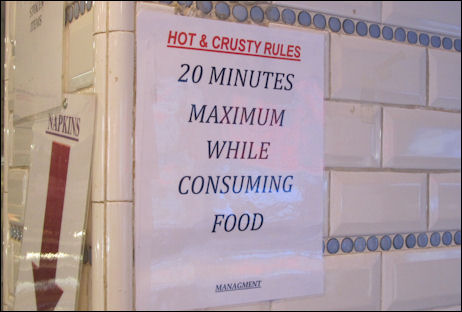 What they really mean is, “Don’t even think of taking out your laptop while you’re eating here. This isn’t the New York Public Library. Find a Starbucks, fella.” 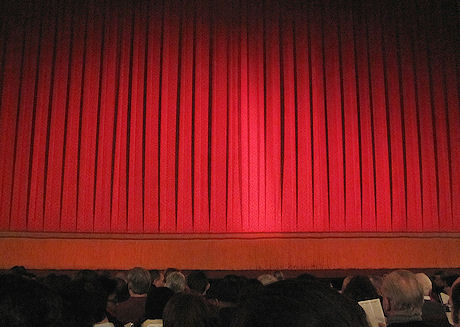 Curtain at the Ethel Barrymore theatre last night before the start of David Mamet’s Race, a tautly written, at times hilarious, highly absorbing piece about what the enormous and perhaps even insurmountable gap that lies between the races. The excellent James Spader, David Alan Grier, Kerry Washington and Richard Thomas costar. On the level of Speed The Plow but not Glengarry Glen Ross — no offense.
December 6, 2009 1:03 pmby Jeffrey Wells
9 Comments
Elegant and Sublime

A woman I was talking to at a party last night became very aroused when I told her I’d be speaking this morning with A Single Man star Colin Firth. “Oh, God…I could be your assistant and just sit there and watch!,” she said. “This would be a very big deal for her!,” her husband chimed in with a smirk. “That classiness, that sense of reserve!,” she went on. “It’s what every woman wants.”

It’s also what everyone else has been savoring since Firth broke through roughly 15 years ago. And now there’s widespread agreement that he delivers the finest variation of this very particular aura or attitude in Tom Ford‘s A Single Man.

One of my better questions began with a paraphrasing of John Ford‘s quote about how directors make the same film over and over. Do actors do the same thing more or less? Firth didn’t disagree. His achievement in A Single Man is that he’s playing the deepest and most intriguing aspect of this patented thing, and that this is mainly why people are calling him the front-runner in the Best Actor race — i.e., because the role of George has found him in exactly at the right place and time, and vice versa.

The lighting in the Carlyle bar was very Vittorio Storaro-like this morning. I imagine it’s this way no matter what time of day. The dark amber tones reminded me of of the apartment-scene lighting in a couple of scenes in Last Tango in Paris. Alas, the Canon Elph didn’t quite capture what was there. And yet a photo I took before Firth walked in (see above) comes pretty close.

All stirring, worthwhile films have memorable characters, and surely the most memorable in Lee Daniels‘ Precious is Mo’Nique‘s mom-from-hell, whose name is Mary. But where is the common current in Mary, whose malicious treatment of her daughter, Precious (Gabby Sidibe), results in ruination and emotional shell-shock that’s stupefying, and which has been caused by levels of systematic torture and abuse that would make Klaus Barbie drop to his knees?

All dramatic art always points to some vein of human behavior and says to its audience, “This but for the grace of God could be your story or your neighbor’s…consider it, open your heart, let it in.” To therefore praise Precious and especially Mo’Nique’s performance involves an acknowledgment that Mary is us on some level — that she’s a metaphor for some aspect of our condition, or is at least a symptom of it.

We’re therefore supposed to nod and say, “Yeah, there’s a certain universality in her behavior…I get it, sure. Going along with her animal-pig boyfriend having sex with her daughter because she figures he’ll love her more if she allows him to do this…mmm-hmm. And because she resents Precious for attracting him in the first place…yup, I hear that, absolutely.”

And female viewers are also supposed to say “yeah, I can also relate to my husband impregnating my daughter twice, which results in a Down Syndrome child (a.k.a. ‘Mongol’) and ultimately Precious becoming HIV positive. It’s not pretty but it happens, right? I mean, don’t a lot of parents sexually abuse their kids and look the other way at father-daughter rape? That’s the kind of human drama I understand, you bet.

“And let’s be honest and admit that we all know a mother or two who constantly berates and emotionally tortures her child, and…you know, does what she can to force him or her to become not just morbidly obese but so humungous that the kid would cause a family of African hippos to flee in the opposite direction? Of course we do. This is who we are. And that’s why Precious is such a moving and powerful film.”

Oh, wait, I’m sorry…you’re telling me you don’t relate to Mo’Nique? That she seems like a grotesque aberration and in several ways inhuman? An easy-chair rage monster who has systematically tortured and slowly murdered her child? You find it bizarre that such a character has been catapulted into the national spotlight and become a topic of Oscar conversation? Oh…I see. Well, don’t you think Mo’Nique was exceptional in making this monster come alive? I mean, wasn’t she fantastic? Of course she was and is.

But to what end, you say? How does making a film about a repulsive and depraved life form add to the art of cinema? What’s the difference, for that matter, between praising a film like Precious in a Best Picture context and an actress who does a phenomenal job of portraying a fiend like Mary and a film about…oh, any of the big-name mass murderers of the last 40 or 50 years? Ted Bundy, Richard Speck, Ed Gein, etc.?

It could be argued that any movie about any monster can be made Oscar-friendly if you simply include a big scene at the end in which the monster explains why he/she did what she did, and why he/she is what she is. All you have to do is have the actor/actress break down and insert lines like “I need love too…what about me?…I may seem like a bad person to you but I hurt badly” and so on.

It took me a while to realize this, but it finally hit me a few days ago why Michael Stuhlbarg‘s brilliant lead performance in A Serious Man doesn’t seem to be getting enough traction as a Best Actor candidate. 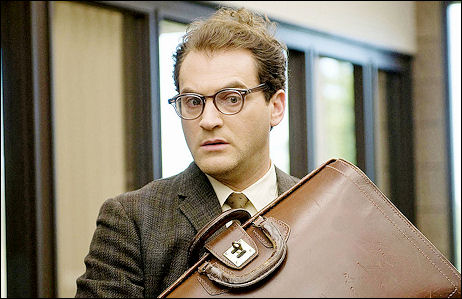 Michael Stuhlbarg in A Serious Man.

It’s not a matter of how good he is at portraying Larry Gopnik, a stressed and perplexed Jewish family man in mid ’60s Minnesota whom God clearly has no affection for. Stuhlbarg is perfect — every line and expression is dead-on. But the reality is that most people (including film industry professionals) don’t respond all that strongly to talent and craft. They respond emotionally to the character being portrayed. And the fact seems to be that people don’t seem to like Larry Gopnik for being too whiny and weak-willed.

In day-to-day reality most people trudge along like Gopnik, their heads down, hoping for the best and prepared for the worst. But they don’t want to see people like themselves when they go to films. They want to see fighters, rebels — men and women who stand up. Gopnik isn’t a fighter — he sits there and repeatedly bends over and takes it, asking “why me?” or, more to the point, “why does God hate me so much?” Answer: because God feels like it. He can do anything he wants, and sometimes it amuses him to torture this or that person, or allow tens of thousands (or millions) to be slaughtered during wars.

Larry Gopnik is a walking embodiment of the realization that suffering and misfortune are random and pointless things that happen to good and bad people for no apparent reason. And people hate that life is like this, despite attempts by millions of us to light candles and be joyous and creative and call glasses of water half-full rather than half-empty. And so they are punishing Michael Stuhlbarg accordingly.

I have an 11 am appointment on the Upper East Side with A Single Man star Colin Firth. His performance in Tom Ford‘s widely-admired film has put him at the top of the Best Actor candidate heap, primarily because Firth channels so much feeling (crushing loss and sadness, a love of life’s sensual stream, flickers of delight) with such a fine sense of subtlety and economy. And thinking about this has led, again, to compiling a list of the best extremely-low-key, less-is-more performances.

One of my all-time favorites is John Hurt‘s intense, hard-boiled performance in The Hit. Who else? Robert De Niro in Heat. Clive Owen‘s performance in Croupier. Jean Servais as Tony le Stephanois in Jules Dassin‘s Rififi. (I know — I’ve posted about this recently before.) Lee Marvin‘s Walker in Point Blank isn’t quite on Hurt’s level (the part isn’t written that way), but he slips in and out of a lost-and-melancholy mode. Michael Caine in Get Carter. Clint Eastwood in Unforgiven. Peter Stormare in Fargo.

But these are mainy hard-boiled performances in crime films. Who, then, has travelled in the same silent still waters that Firth has? Waters stirred with a certain melancholy, sadness, resignation. lI know — Paul Winfield in Mike’s Murder. Who else? Okay, I’ll put a point on it. Who has given the most affecting performances of somewhat older gay guys in movie history? Not that many, when you get down to it.

Either people have made their Sundance lodging arrangements in a more responsible way than myself (i.e., before 12.1) or they’re just not attending the festival because it’s been a tough financial year. I only know I haven’t gotten any takers on an offer to share a large one-bedroom, two-bathroom place near the Marriott for only $1200 total, or $600 for two. I could just rent it myself, of course, but it’s more than double the size of what I need. Plus I’m cheap. I need to figure this out today. Hell, I’ll take the couch.

Why do I find this summary of the last ten years faintly draining? By glibly focusing on the catchiest and most superficially noteworthy events, it’s mainly a reminder of how devoted the headline-driven news business is to perpetrating its own mythology. The Facebook, YouTube and Twitter revolutions are the only developments that seem to have moved the game along, to go by this rundown. The rest (even Barack Obama‘s election, in hindsight) seems to have been about smoke.

I’d like to see a similar-type review of where the best films have taken us — a review of the great themes, personalities, “movie moments.” The rise of the studio dependents and the gradual abandonment of the smart, upper-middle-class movie by the studios, the fall of print critics (along with print in general) and the rise of online punditry, and collapse of indie financing over the last twelve months.