Support on Patreon Follow @wellshwood
20 Comments
Our Grapes of Wrath

N.Y. Times columnist Frank Rich has written a rousing paean to Jason Reitman‘s Up In The Air in the Sunday edition. For those who haven’t decided to vote for the George Clooney topliner as a Best Picture nominee or winner, Rich’s piece will close the deal. Certainly among Academy members who read the Times over Sunday brunch. 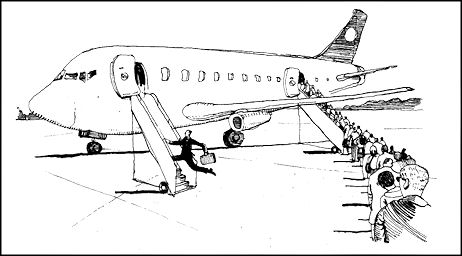 Up in the Air “is not a political movie,” he writes. “It won’t be mistaken for either a Michael Moore or Ayn Rand polemic on capitalism. What makes it tick is the struggle of Clooney’s character, Ryan Bingham, to reclaim his own humanity, a story that will not be described or spoiled here. But the film’s backdrop is just as primal — and these days perhaps more universal — than the personal drama so movingly atomized by Clooney in the foreground.

“Here is an America whose battered inhabitants realize that the economic deck is stacked against them, gamed by distant, powerful figures they can’t see or know. Up in the Air may be a glossy production sprinkled with laughter and sex, but it captures the distinctive topography of our Great Recession as vividly as a far more dour Hollywood product of 70 years ago, The Grapes of Wrath, did the vastly different landscape of the Great Depression.

“While Up in the Air opens with a remix of Woody Guthrie‘s Depression-spawned “This Land Is Your Land,” its dispossessed Americans don’t resemble those in a black-and-white Dorothea Lange photograph. They’re not the familiar contemporary blue-collar factory workers in our devastated manufacturing economy. They are instead mostly middle-class refugees from the suburban good life depicted in credit card ads.

“Their correlative to the Dust Bowl is a coast-to-coast wasteland of foreclosed office spaces where desk chairs and knots of dead phones lie abandoned in a fluorescent half-light. Up in the Air taps into the desperation, fear and anger that both the populist left and right are trying to articulate right now, and that leaders of both parties have failed to address.”

“There are parallels between Precious and Samson and Delilah as they both tackle taboo issues in their respective societies — race issues in their different forms in two quite different countries,” says HE reader Joel Meares.

“I personally feel Samson avoids some of the pitfalls of Precious, which I greatly respect and admire, as well. But where Monique‘s performance and the teacher character in Precious hit extremely false notes for me (and seem to tie the film to a very Hollywood construct it other times deftly avoids), Samson stays on course the whole way through.

“Whether that delivers emotionally in the same sense is a question. Samson is more dulling than heart-wrenching, but it’s an extraordinarily consistent and honest film.”

The only flagrantly bad thing about Avatar is James Cameron‘s decision to play a Leona Lewis song called “I See You,” written by overall score composer James Horner, over the closing credits. Cameron apparently still doesn’t understand that Titanic‘s closing vibe was ruined by the end-credit playing of “My Heart Will Go On,” that repulsive Celine Dion song. Including both tunes were total whore moves, looking to appeal to younger women, get a song played on the Oscar show, etc.

You can sometimes detect little hints in the online summaries of Sundance Film Festival selections (which are usually written by festival programmers) about how good or not-so-good the films are. And they’re evident, I think, in the summary for Floria Sigismondi‘s The Runaways, the ’70s rock-band biopic with Kristen Stewart as Joan Jett and Dakota Fanning as Cherie Currie. And I’m a little bit worried.

The film is “an ode to an era and a groundbreaking band,” the summary says. (In other words, it’s all over the place?) “Acclaimed video artist Floria Sigismondi directs from her own script” — danger! danger Will Robinson! “Her luscious camerawork captures every sweaty detail, from the filthy trailer where the women practice to the mosh pits of Tokyo,” it says. (In other words, the camerawork is fast, random and grab-baggy without conveying a unifying mood or aesthetic.) “What really makes the film cook are the sizzling performances by Fanning and Stewart.” (That’s fine but in what ways does the film itself cook? What does it say, where’s it coming from, what’s the angle or undercurrent?)

I’ve rented HE’s Sundance pad — a large one bedroom that sleeps three or four with a bedroom queen, a foldout couch and bunk beds — but now a filmmaker who was going to stay has bailed so I’m looking for someone to step in. It’s right near the Marriott and runs from Saturday, 1.23 to Saturday, 1.30, and it’s only $400. Yup, seven days in Park City for less than $60 a day. Oh, and I need a place to flop from Wednesday, 1.20 to Saturday morning, 1.23, if anyone knows or hears anything.

26 Comments
Damaged or Wised Up?

If a jarring or traumatic event happens in your adolescent or teen years, it can stay with you into adulthood, and can sometimes even trigger a neurosis or shape some aspect of your personality. This has been a recurring motif in I-don’t-know-how-many dramas I’ve seen about coping with this or that lingering issue. But what about stories in which a traumatic event or some kind of metaphorical face-slap wakes a character up? Not right away but gradually, I mean.

Who hasn’t had an experience that delivers some kind of stern but helpful cautionary tale? I certainly have, but I’m hard-pressed to remember a film or a play, even, that has told such a story. It’s always “oh, I had a terrible thing happen to me when I was 11 or 16 or whatever and I still haven’t gotten over it.”

I did some of my growing up in Westfield, New Jersey, where I lived from age 5 to 16 and 1/2, and it was in that mild-mannered little whitebread town where I experienced one of my key wake-up moments. It was a fall afternoon and I was sitting at a backyard patio table with a friend and his father. My friend and I were 16, and his 40ish dad, a sardonic, sometimes blunt-spoken dentist, was in a blunter-than-usual mood when he began to judge our character and prospects. You either had something on the ball, he said, or you were a washout. And then he looked at his son and said with dispassion, as if he was reading the price on a cereal box, “You’re a washout.” And then he looked at me and said, “And you’re a washout.”

It didn’t feel like much at the moment, but this was the first time in my life that an adult had looked me in the eye and told me I had more or less fucked myself with my lousy grades and my anti-authoritarian fuck-all attitude. I know I’ve never forgotten this, and I’m now persuaded on some level that these tough words lit a fire. I suddenly realized, “Uh-oh, I might have a real problem.” I’d been hearing this all my life from my parents, of course, and from most of my teachers. About what an under-performer I was, blah blah, and how I needed to change my ways. But somehow the dentist got through while the others had just made me turn off all the more. Their admonitions felt like mosquitoes or the meowing of cats outside my window.

And yet an adult dispensing blunt, straight-from-the-shoulder, take-it-or-leave-it candor to a teenaged son (or a friend of his teenaged son) is pretty much forbidden these days. You’re supposed to just show support and encouragement to your children and give them plenty of hugs. That’s good advice, I think. It’s all I’ve ever done (or tried to do) with my two sons. If I had to co-raise and co-counsel them over again I wouldn’t play it any differently. But I’m just as certain that a clanging alarm bell went off when I heard the “w” word, and I think I may have decided that day to prove the dentist wrong (or at least began to think along these lines), so he may have done me a pretty big favor. He’s dead now so maybe he’s hearing me say this on some level.

The start of the 2010 Santa Barbara Film Festival in early February will mark the four-year anniversary of the first appearance of John Scheinfeld‘s Who is Harry Nilsson (and Why Is Everybody Talkin’ About Him?). It has the ironic distinction of being one of the best rock-music docs ever made and at the same time totally finished as far as distribution prospects are concerned.

If you haven’t signed out a distribution deal after four years of trying your film isn’t just dead — it’s fish guts lying in a tin bucket on a pier. A real shame. Talking last night to Jeff Bridges about this film is what set me off. 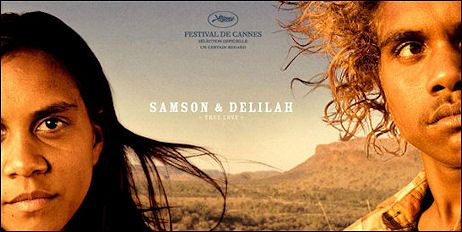 So why wasn’t I doing cartwheels in the Grand Palais after seeing about 45 minutes worth in Cannes last May? Because Samson and Delilah doesn’t exactly rev its engines with rousing action and story tension during the first act, and because…I forget but I probably had another film to catch or an interview to do or a story to file. There’s always something nipping at your heels during that festival. Maybe I was simply letting the impatient, foot-tapping aspect of my Cannes personality run the show. My judgment isn’t infallible, and fatigue sometimes has a disproportionate influence.

It was obvious from the get-go that Thornton was (a) a serious and talented filmmaker and (b) investing in character and mood before putting his story in forward gear — i.e., before the lovers decide to steal a car and hightail it. Last night’s win, in any event, has persuaded me to watch Samson and Delilah again, jetlag-free. A screener, I’m told, is on its way.

An assessment of Los Angeles industry culture by HE regular LexG seems fairly sage. “I tend to think of Oscar movies as having to appeal to ‘LA Taste,'” he wrote last night. “Los Angelenos, particularly the voting denizens of Brentwood, Bel Air, and Beverly Hills, have a certain cinematic palate that isn’t just different from mass America, but from even NYC film fanatics or cineastes anywhere else. LA Taste is very milquetoast, very Clooney, very upscale. The kind of people who shop at the Grove and eat Whole Foods and prefer an intellectual barrier, an ironic remove. 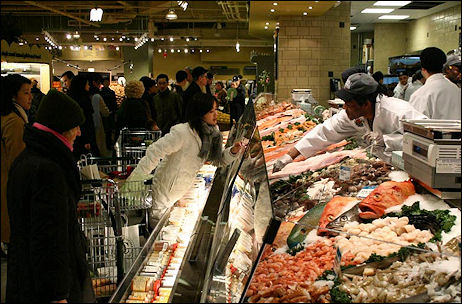 “It’s sort of like how Scorsese and Spike are NYC directors who don’t get the same love in LA. LA people are removed, caustic, ironic, a little uncomfortable with that grimy, in-your-face intensity or crazy overkill. Someone like Altman or the Coens are an LA film geek’s director — that layer of taste, of commentary, of artistic remove and good-for-you propriety. Clint, of course, goes over like gangbusters at Oscar time because he reminds the Jack Gifford-looking old-time producers of the Old Classicism — extremely well put together movies that don’t make them personally uncomfortable.”

Mulling this over, George? You’re an actor-director-producer with talent, taste and marquee appeal on an excellent run and with all the right cool-director associations (Alexander Payne, Jason Reitman, Soderbergh, Coens, Wes Anderson, Anton Corbijn), and yet distant and muffled chants from the flatlands are equating the Clooney brand with “ironic remove” and the high-end offerings at Whole Foods.

I know — better to be the ironic remove guy than clunky-earnest and better Whole Foods than Ralph’s or that 1930s quonset-hut grocery store on Cahuenga, but you know what I’m saying. The intellectual streetcorner class is persuaded that the stuff you’re putting on the table is a little too sanctified and approved by the comfortables. Maybe you need to hit refresh, forge new alliances, talk to some scruffy young directors from Mexico or Israel or Iran…something. Live a little more dangerously while you can (i.e., before older-guy complacency takes over).