Support on Patreon Follow @wellshwood
38 Comments
Why Was That?

The enclosed comments are two or three days old, but it’s somehow satisfying to hear Hollywood Reporter critic Kirk Honeycutt call LAFCA (i.e., the Los Angeles Film Critics Assocation) dweeby, off on their own beam, and “out of touch” because they ignored Avatar.

I was also amused to hear Honeycutt describe Seraphine‘s Yolande Moreau as “an actress nobody ever heard of.”

Firedog Lake’s Jane Hamsher to drug-company lobbyist Lanny Davis on today’s (12.17) Ed Show: “Which drug companies and health corporations are you speaking for when you tout this [de-balled health care] bill? Who’s paying you to be here?” I couldn’t put this up until I got home late tonight, but it’s quite beautiful.

And good on Howard Dean for calling a spade a spade — i.e., the de-balled health care bill will “put this country on a trajectory which is a disaster. This is an insurance company’s dream, this bill. This is the Washington scramble, and I think it’s ill-advised…a bigger bailout for the insurance industry than [AIG]…a very small number of people are going to get any insurance at all, until 2014, if the bill works.”

And finally a respectful salute to Sen Al Franken for objecting today to Sen. Joe Lieberman‘s request to speak an extra gaseous minute.

“One of the pleasures of the movies is that they transport us into imaginary realms, into Eden and over the rainbow to Oz. [And yet] few films return us to the lost world of our first cinematic experiences, to that magical moment when movies really were bigger than life (instead of iPhone size), if only because we were children.

“Movies rarely carry us away; few even try. They entertain and instruct and sometimes enlighten. Some attempt to overwhelm us, but their efforts are usually a matter of volume. What’s often missing is awe, something James Cameron has, after an absence from Hollywood, returned to the screen with a vengeance. He hasn’t changed cinema, but with blue people and pink blooms he has confirmed its wonder.” — From Manohla Dargis‘s N.Y. Times review of Avatar, currently up.

I still haven’t seen the IMAX 3-D Avatar (20th Century Fox’s press screenings only showed the regular-sized 3-D version) so last night I bought two tickets on Fandango to a 3:15 pm Friday show at Leows 34th Street. And they hit me for $16 or $17 bucks a pop. I was slightly trembling after the purchase. $32 or $34 dollars for a pair of tickets to a damn film?

I don’t know if Hitfix’s Drew McWeeny has reviewed Guy Ritchie‘s Sherlock Holmes or not, but I do know I can’t find his review so let’s assume he hasn’t posted and that he’s either currently writing or has recently written one up, etc.

I’m not trying to be an asshole but I’m wondering what this must feel like, Drew being so invested in Holmes lore and having called himself “Moriarty” while writing for AICN and having taken shots at me for hating the movie unseen and asserting that it’s valid for Holmes to be a muscular kick-boxing martial arts stud and so on because it’s all this stuff is in the original Arthur Conan Doyle books, etc.

And yet…well, this shouldn’t matter to a serious critic like Drew but he must be aware of the swirling grey clouds taking shape overhead. He must be at least sensing what the Movie Godz are saying about this film. Or at least what’s being grumbled about in some quarters, which is that Sherlock Holmes is yet another example of ongoing cultural devolution and a corporate-funded desecration of a time-honored literary brand in order to grab 21st Century Eloi dollars.

I’m not judging Drew. I’ve been in similar pre-emptive situations. I’ve gotten my hate-on for unseen films only to realize the finished film isn’t half bad (i.e., The Lovely Bones). I’ve fallen in love with this or that script only to feel disappointed after seeing the film. I’ve been mezzo-mezzo or mostly-but-not-100%-positive about a script only to fall head-over-heels for the film (i.e., Rushmore). Or I’ve felt enormously hopeful about an English-language remake because I so enjoyed the European- or Asian-made original only to feel crestfallen, etc.

I only know that McWeeney must feel a little twitchy right now, and that I feel his pain. Or the tension in his brain, rather. But he’s a good-enough writer to deal with this sort of thing. I guess all I’m really saying is, I’m looking forward to his review.

It’s 5:15 pm and dark out as I sit at my usual Lincoln Center-area Starbucks. I’m about to head downtown for Indiewire’s Xmas party on Spring Street and therefore don’t feel like calling around about anything, but a friend tells me there’s a small story to be had about whether or not Up In The Air‘s real-life unemployed will make an appearance at the Oscars in early March.

One of the angles is “did Up In The Air‘s real-life ‘terminated employees’ get Taft-Hartleyed into SAG so they can get a little residual kick-back from the movie?” Will they at least be invited to the Oscar telecast? And if Up In The Air wins Best Picture, “will father and son producing team of Ivan and Jason Reitman give a shout-out to those ‘terminated employees’ in the audience – or better yet, even call them up on stage to receive recognition?”

I’ll make some calls about this tomorrow morning. Fair enough?

Slate V has posted a spirited chat with Rebecca Winters Keegan about her just-out book, The Futurist: The Life and Films of James Cameron (Crown).

I’ve read about 85% of Keegan’s book over the last two or three weeks. I was mainly looking for stories of Cameron’s fights and goadings and tongue-lashings, which I love. (I heard some real wowsers about the making of Titanic.) But Keegan so admires Cameron that she either didn’t try to dig up stories of sturm und drang or she heard them but decided not to use them in the book. Whatever…it’s still a very cleanly written, highly interesting read.

Keegan wrote the book with Cameron’s cooperation. Cameron told…okay, hinted to me last summer that working with Keegan wasn’t exactly giving him orgasms, but that he felt it would be better to work with her than not. In other words, he thought it theoretically wiser to have the camel inside the tent pissing out than outside the tent pissing in. The irony is that Keegan didn’t turn out to be a camel. She’s a superb reporter and a good storyteller, but she’s more into praising than pissing.

“Guy Ritchie‘s hyperbolic Sherlock Holmes isn’t a movie — it’s a franchise,” writes New Yorker critic David Denby. “Or, at least, a would-be franchise. Arthur Conan Doyle‘s material has been grabbed by its velvet collar and thrown into twenty-first-century media culture. Such a turn was inevitable. The subdued charm of Conan Doyle’s hansom cabs, enveloping fogs and courteous manners, in which the facade of gentility is broken up so delightfully by devilish conspiracies, is not of our age.” 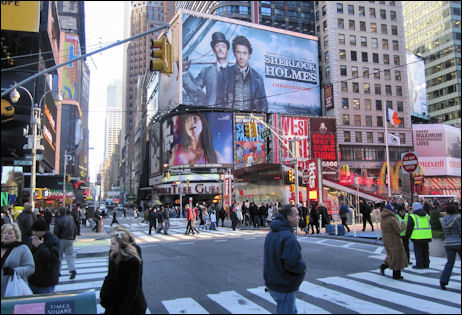 In other words, ladies and gentleman: Sherlock Holmes: The Coarsening and Degradation of Civilization As Your Fathers and Grandfathers Once Knew It.

“In Ritchie’s version, the facade doesn’t even exist: his London is rubbled and mucky, with beggars underfoot, and fouled by half-finished industrial monstrosities. Ritchie’s visual style, aided by the cinematographer Philippe Rousselot, is graphic-novel Victoriana: there are steampunk interiors — ironworks and infernal machines with a retrofuturistic look — and dim laboratories in which everything looks rank. The movie is grimly overproduced and exhausting, an irritating, preposterous, but fitfully enjoyable work, in which every element has been inflated.” 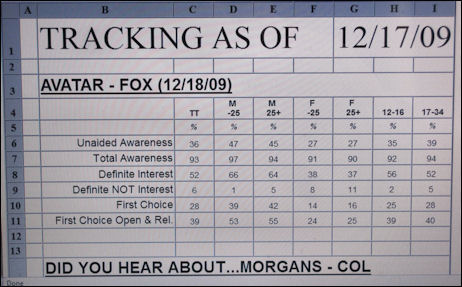 Eagle-eyed Avatar fans might want to take note of possible differences between the IMAX 3-D version and the regular 3-D versions. Netherlands-based HE reader Jonathan Spuij claims he’s seen “both the IMAX 3D cut and the regular digital 3D version of Avatar and I noticed two small changes in scenes.” Or at least he thinks he did.

“First, when the super-tree gets destroyed, the IMAX cut shows the clansmen trying to fly off their banshees from the top of the falling tree,” he writes. “I didn’t notice this shot in the regular version.

“And second, there’s a shot in the trailer of Sam Worthington sitting by his Avatar-machine in the lab in his wheelchair. The little scene preceded the final video recording in the IMAX version but was cut from the regular version.” Wait…I don’t get what he’s saying here exactly.

Spuij finishes his letter with “is there more or am I just imagining things?” Is he?

I have to return a rental car in New Jersey and then bus back into Manhattan for a Serious Man luncheon at the Monkey Bar starting at 12:30 pm, so I haven’t time to get into the just-announced SAG Award nominations.

It’s the same old gruel anyway with Up In The Air, Precious and Inglourious Basterds taking three nominations each. Mark my words — five years from now the people standing by Precious will be like Peter denying three times that he knew Yeshua of Nazareth. Who, me…Precious…what?