I saw a fake IMAX presentation of Avatar late this afternoon at the AMC Leows 34th Street, and it played a nudge better than last week’s initial exposure. In part because I was able to better assess and appreciate how the four-act structure works and how it all brilliantly pays off during the final half-hour.

The four acts can be summarized (spoiler whiners are advised to READ NO FURTHER) as (a) Jake Sully’s introduction to the deal and the Na’vi reality — i.e., the opportunity to serve as a military spy through his transformation into a Na’vi body and immersion into the Na’vi culture, and his first adventures going into this process; (b) love and exploration as Jake passes through the rites and passages of becoming a Na’vi, and the blooming of his feelings for Neytiri, his native guide and friend, ending with the line “Jake, what the hell are you doing?”; (c) disappointment, betrayal and downturn as Jake enrages his military boss, Colonel Miles Quaritch, by switching his allegiance to the Na’vi, and then admits to the Na’vi his military mission, which infuriates them as well, followed by brutal military attacks upon the Na’vi that send them scurrying; and (d) Jake’s resolve, forces gathered, Na’vi retaliation, serious payback, love fulfilled and final transformation.

I intend to see Avatar again at the AMC Lincoln Square in the super-sized IMAX theatre on Wednesday. I wasn’t all that satisfied with the look of the Avatar Day reel last August (i.e., digital transferred to film) but Coming Soon’s Ed Douglas saw it there today and was happy. “I think they must have changed to digital because the movie looked just as good if not better on the largest screen possible,” he said.

The Punch.com‘s Sam Cleveland has delivered five reasons why James Cameron‘s Avatar might very well make its money back.

In a nutshell, it’s because the mega-budget 3D sci-fi spectacle “has been designed with a sort of calculated universality” that “will play across almost all racial and cultural boundaries…there’s no country on the globe that Avatar won’t work in.”

(1) The US has a global image problem, and Avatar‘s “black and white depiction of primitively-equipped Na’vi good guys struggling against heavily armed US space soldiers — all clenched teeth and good ol’ boy attitude — will play like gangbusters around the world…imagine the opening night crowd at the Baghdad plex.”

(2) White man? Black man? Red man? Try blue man. Sam Worthington‘s Jake Sully is a young marine whose mental/emotional/spiritual essence is transferred into a Na’vi body, and thereby becomes in effect a racial avatar for every tribe on the planet…he’s simultaneously no race and/or whichever race has ever been outgunned and oppressed” — an ideal cipher for viewers of whatever tribal background.

(3) Pandora’s almost-Earth’ look “provides the film a grounded reality “that will elicit just as many oohs and aahs from audiences in Paris, Texas, as in Paris, France.”

(4) Three really is the magic number with Avatar giving adult audiences who haven’t quite experienced a profound 3D high “a comfortable way to experience the well-established format.” The film has therefore “been positioned as much as a talking point as an entertainment — something ‘you’ve gotta see.'”

(5) One for the ladies. “As Avatar progresses, Worthington’s character meets and falls in alien love with a Na’vi princess (Zoe Saldana), and their affair is deftly handled — in a sense the affair registers more authentically than Jack and Rose’s did in Cameron’s Titanic, and it is given plenty of screen time.”

Avatar “might have a softer edge than Cameron’s earlier sci-fi rockers Aliens and Terminator 2,” Cleveland concludes, but “family friendly = wider box-office net…it’s a great time at the movies and a good-value ticket. The film hits all its marks, a highly unusual entertainment packaged with something for everyone.”

I’m a week late to this, but Red Letter Media’s multi-chaptered explanation about why The Phantom Menace sucks eternal dog balls is quite lucid and specific and well-ordered. Call it the final nail in the coffin of The Phantom Menace and particularly the reputation of George Lucas, as if this was necessary.

Quentin Tarantino was interviewed by Elvis Mitchell last night at the Museum of Modern Art’s downstairs theatre following a screening of Inglourious Basterds. You could feel the worship in the room as Tarantino made his way down the aisle. He’s as much of a celebrity as any big-name actor. Nobody is better at giving an audience a good time.

I was standing next to QT during the final few minutes of the film, and he was laughing and enjoying it like someone seeing it for the first time. Producer Lawrence Bender and Harvey Weinstein also attended.

In the first video Tarantino talks about preparing a scene in Inglourious Basterds . In the second video he talks about getting advice from Sundance workshop colleagues about subtext into his Reservoir Dogs screenplay. 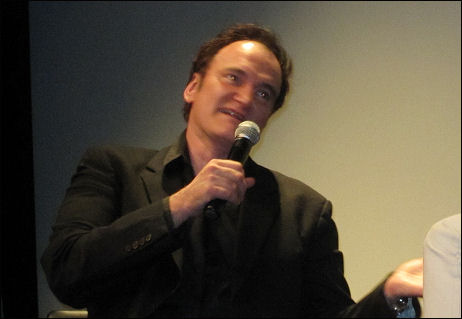 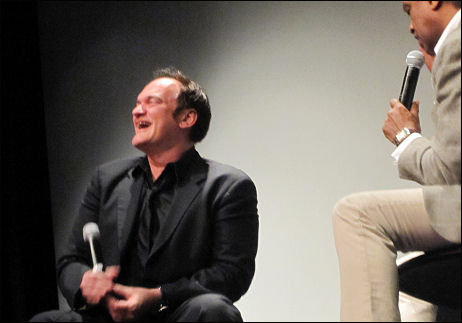 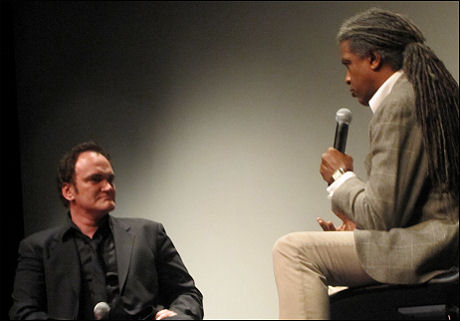 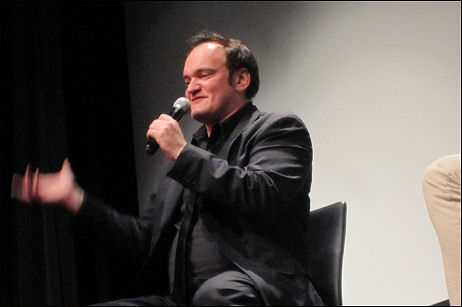 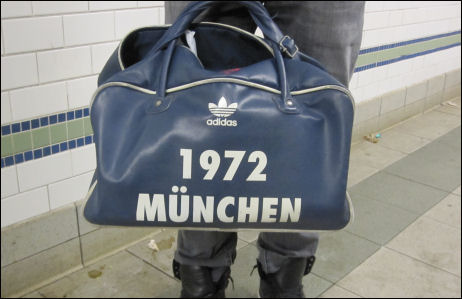 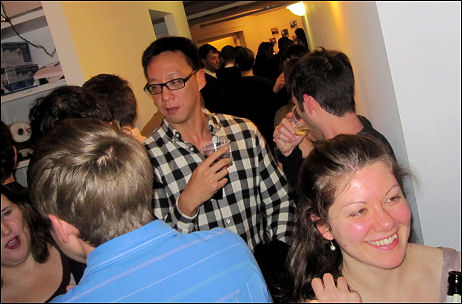 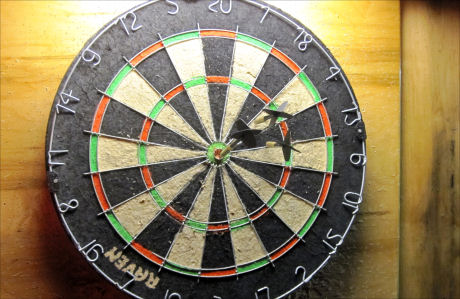 I’ve never hit a dart board bull’s-eye in my life, but I did last night at the Kettle of Fish. The occasion, organized by Coming Soon’s Ed Douglas, was a send-off party for Todd Hill.
December 18, 2009 8:38 amby Jeffrey Wells
40 Comments
Quip

I don’t agree with this Avatar pan by Nerve’s Scott Von Doviak, but I laughed at the following line: “After spending a while in the aquarium-like world of Pandora, I started to feel like I was staring at the world’s most expensive screensaver.” Okay, perhaps the fact that I laughed means on some level that I did agree with Von Doviak. All right, maybe…in a kind of peripheral. don’t-bug-me, having-too-good-a-time sense.

HE reader DeafBrownTrashPunk was initially surprised to find The Real Cancun included among Salon’s Films of the Decade series, but it made sense to her after considering Michael Tully‘s explanation, to wit: Cancun isn’t a great film but a “disturbingly relevant historical document” about the eventual fall of Western Civilization due…well, due to many things but at least partly to the pathetic nowhereness of 2003’s wanker-class college youth. The film shows us scores of George Bushes-to-be having the time of their lives, and we all know where that leads.

“I remember how, as a young Muslim college student struggling to fit in after 9-11, I was shocked and appalled by how the U.S media was always focused on stupid reality shows and celebrities like Paris Hilton while ignoring the freshly declared war in Iraq and Afghanistan,” she writes. “It seemed like, at the time, at my school, nobody cared, except for olds hippies and Vietnam vets who were against the war and constantly spoke out.”

She asked for my reaction, and I wrote back that Tully “is essentially observing the same thing about the mindless party-class Eloi of six and a half years ago in The Real Cancun that I’ve been talking about every other day on the site. These people are truly a cancer eating away at the remnants of culture in the 21st Century. Samuel Johnson, Victor Hugo and Baba Ram Dass would get hold of firearms and shoot them. In a forward-thinking world they would be rounded up along with the Tea Baggers and incarcerated in government-funded green re-education camps. I’m perfectly serious — they need to be compassionately re-nurtured and re-educated in order to have various corporate poisons removed from their souls. Is that such a terrible idea? I’m not Mao Zedong advocating firing squads.”