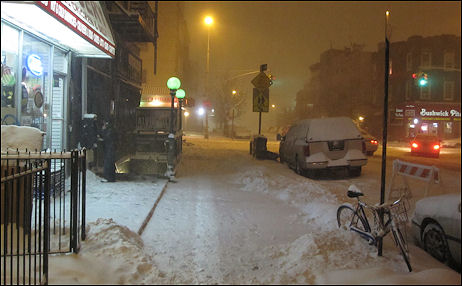 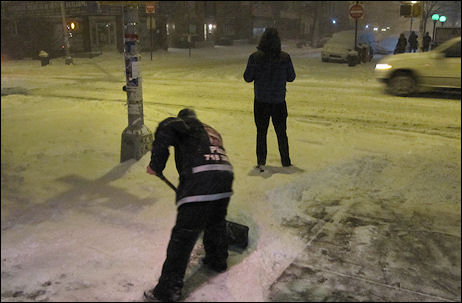 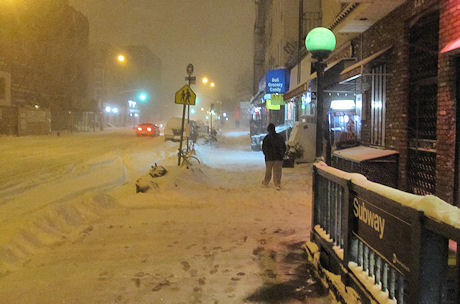 “Something’s not right here,” Bill Moyers began at the top of a 12.18 broadcast of Bill Moyers Journal. “One year after the great collapse of our financial system, Wall Street is back on top while our politicians dither. As for health care reform, you’re about to be forced to buy insurance from companies whose stock is soaring, and that’s just dandy with the White House.

“Truth is, our capitol’s being looted, Republicans are acting like the town rowdies, the sheriff is firing blanks, and powerful Democrats in Congress are in cahoots with the gang that’s pulling the heist. This is not capitalism at work. It’s capital. Raw money, mounds of it, buying politicians and policy as if they were futures on the hog market.”

The video discussion that follows between Moyers, Rolling Stone‘s Matt Taibbi and The American Prospect‘s Robert Kuttner is worth watching (or reading the transcript of).

I missed the 12.17 news of Jennifer Jones‘ passing at age 90. The only film in which her aura came through for me was in Portrait of Jennie (’48) and, to a slightly lesser extent, Since You Went Away (’44) and A Farewell To Arms (’57). Everyone thought she was excessive in Duel in the Sun (’46) but then that whole film was excessive.

Precious costar Mo’Nique, whose performance has been way over-praised but has nonetheless locked an Oscar nomination for Best Supporting Actress, is continuing to give Academy members reasons not to vote for her. The latest boner, as reported by Gold Derby‘s Tom O’Neil, is her decision not to accept her Best Supporting Actress award from the New York Film Critics Circle on 1.11. 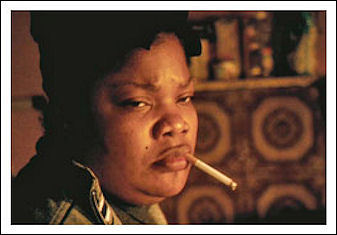 A rep explains that “Mo’Nique and her family will just be returning from vacation that very night” [presumably she means Monday, 1.11] and that “she begins taping her TV show in the a.m. on the 12th.”

Bullshit, bullshit, bullshit. If Mo’Nique had any respect for the NYFCC she would cut short her vacation by a day or so and haul her lard ass up to Manhattan on the 11th. It’s 12.19 today — she’s got over three weeks to figure this out. And who ends their vacations on a Monday? People flying coach and looking to avoid the crowds?

If Mo’Nique is worried about being fresh and well-rested for the taping of her Atlanta talk show, she could probably delay the start of taping by a day. She could certainly hop on a NY-to-Atlanta plane on the night of the 11th and get a good five or six hours sleep, no problem. So she’s full of shit. She’s not attending the NYFCC ceremony because she doesn’t care to — end of story.

And one of the reasons she doesn’t care to, I suspect, is because the NYFCC is being honcho’ed this year by an outspoken African-American critic, Armond White, who thinks Precious is a load of crap. So in addition to “attitude queen” and “show me the money” we can add “coward” to the list of Mo’Nique slogans, pronouns and adjectives.

Response quotes: Yesterday a prominent NYFCC member, speaking anonymously to O’Neil, said Mo’Nique’s snub lends “credence to the story that she wants to be paid to show up for these things.”

Us Weekly‘s Thelma Adams adds the following: “As a NYFCC member, my response is more snacks and drinks for us, and more available seats for more congenial people. My guess is that Meryl will attend.”

The NYFCC ceremony will take place at Crimson in the Flatiron district.

Take this, Mr. Beaks and Devin Faraci and all the rest of the anti-Avatar fanboys who’ve dropped to their knees in praise of all kinds of fanboy-cathedral movies in the past, including the tedious, exhausting, mostly unwatchable Lord of the Rings trilogy:

“Like people who can’t dig the Arcade Fire’s album Funeral, I’d find it hard to respect anyone who can’t enjoy this bloody masterpiece. I think it’s so universal, so human, and so ridiculously beautiful that it reveals a pretty serious character deficiency to not be able to go with it. Saying the story is predictable is like saying the view from Tengboche Monastery of Mt. Everest (the most beautiful view I’ve ever seen) lacks surprise because you’ve seen the photos.” — HE reader Plastique Elephant, posting today.

The curious carpings of Mr. Beaks, Devin Faraci and others aside, Avatar is here and surging upward with fairly big numbers for the weekend (over $70 million) and everyone now realizing that the Best Picture race is down to Avatar vs. Up In The Air vs. The Hurt Locker. Cameron’s story is familiar, but it works. It lays out the elements, marshalls its forces, turns up the heat and pays off big-time in the fourth act.

I was among paying customers yesterday at the AMC 34th and I could feel the film kicking in and holding on, and now the word is flash-flooding as we speak, even among the Eloi, whose reputation rests on their inability to read or sense coolness in any movie that doesn’t have a blatant, dumb-ass, cultural-junk-food hook until very late in the game.

But what people are telling their friends and families and co-workers is that it’s not the CGI and the 3-D sizzle alone — it’s the all of Avatar that makes it play like it’s ten feet tall.

But the “all” couldn’t be sold or even generally described or hinted at, for whatever reason, and so Fox marketing was allowed to only sell the sizzle, and the word-of-mouth that came out of this began to sour in late August and spiralled downward. Face facts and admit what an all-but-total failure the Avatar marketing effort was over the last five months since the ComicCon debut in mid July.

The 7.23 ComicCon footage screening, in fact, was the only unmitigated positive-sell moment in the entire campaign.

The appearance of the first Avatar trailer on 8.20 was the absolute nadir — the wound that never quite healed over the next four months until the finished film began to be seen. This was followed by the Avatar Delgo Ferngully comparisons — more crap in the fan. Then came the good-but-not-great reaction to Avatar Day in theatres, followed by the appearance of Hitler Avatar on YouTube. What a month! By Labor Day the Avatar word-of-mouth campaign was wobbly and against the ropes.

It all kind of simmered in the pan throughout the fall, clucking and crackling like fried eggs but never really changing the downbeat August assessments. The “don’t like them blue people” meme seemed to build and build. And then came the final embarassment before screenings started — i.e., that awful one-sheet with a Na’vi face that clearly didn’t belong to Sam Worthington or Zoe Saldana and which reminded me and others of Thriller-era Michael Jackson, for God’s sake.

And then Avatar was screened on 12.10 and everything turned around like that. But before this happened Fox marketing had everyone and his uncle convinced (myself included) that Avatar was some kind of problem movie, or at the very least a so-so or underwhelming thing.

HE’s Moises Chiullan (a.k.a. Arthouse Cowboy) has posted a favorable review of Martin Scorsese‘s Shuttter Island. “The average viewer has become accustomed to focusing more on ‘figuring out the twist’ than actually watching the movie,” he begins. “This is thanks to so many films of the last few decades hedging all their bets on one gimmicky little MacGuffin.

“Thankfully, Scorsese’s new film keeps you too busy to get very distracted. It does involve a plot twist, but Shutter Island is much more invested in the series of bends in the road that get you there, and the picture is better for it. The turn itself plays more cathartic than revelatory. The real key is to openly question everything from the beginning. You quickly collect so many conflicting theories that you can’t do much other than attempt to solve the mystery at hand along with Leonardo DiCaprio‘s Edward (Teddy) Daniels.”