The 12.18 Gurus chart had Notes on a Season‘s Pete Hammond and Awards Daily‘s Sasha Stone joining MCN’s David Poland in predicting Avatar to win Best Picture with Indiewire‘s Anne Thompson, USA Today‘s Anthony Breznican and Hitfix‘s Gregory Ellwood putting it in their #2 slots. But in today’s chart (12.23) Thompson and Ellwood have bumped Avatar up to #1, and In Contention‘s Kris Tapley and USA Today‘s Suzie Woz are voting the same way — a total of seven Gurus on the Avatar-to-win team. The latest Gold Derby Buzzmeter Best Picture poll still isn’t up, but the last I heard it was myself, Hammond and Stone for Avatar winning.

In Paul Byrne‘s 12.24 review of Guy Ritchie‘s Sherlock Holmes,which he calls “a travesty,” he says the following: (a) “Robert Downey, Jr.’s accent is ‘flawless,’ according to Ritchie, which either means he’s deaf or I’m the Prince of Wales,” and (b) “This is Holmes the romp — overplayed, overwritten and overwrought, a Sherlock for the age of the easily distracted.” 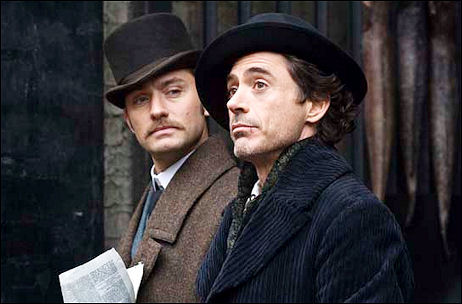 Hollywood & Fine’s Marshall Fine says, “There are plenty of reasons to dislike Guy Ritchie’s post-modern take on Sherlock Holmes, but here’s the main one:

“Unlike most heroes of American detective literature (Nero Wolfe being the rare exception), Arthur Conan Doyle‘s storied detective is not and never has been an action hero. Not that he’s averse to a bit of rough-and-tumble in the name of self-defense — but Conan Doyle’s stories are singularly devoted to his creation’s remarkable deductive skills, not his ability to outfight giants or outrun fireballs.

“If Ritchie, an intriguing film stylist, and producer Joel Silver (whose ham-handed fingerprints are all over this film) wanted to make a James Bond film set in Victorian times, why call him Sherlock Holmes?

“Elementary, dear reader: Because this is a shameless bid at transforming Holmes and partner Dr. Watson (Robert Downey Jr., Jude Law) into a franchise, a tentpole – and all of that other Hollywood jargon that means ‘a character who can be relied upon to make more than $100 million per film at the box office for years to come.’ Harry Potter films won’t last forever, but Holmes could be the gift that keeps on giving.”

Obviously high-quality clips….cool. Nicely paced and cut, but you’d think 2009 was mostly about wow intensity rather than stories, themes, emotions and mood poems of one kind or another. It makes you simultaneously think “yeah, 2009 did have several good films” and “wait a minute, this isn’t telling the real truth about what happened.” Did they have to use that same old Hurt Locker clip with the bomb exploding and the gravel rising up? What’s the thing with the alligator in the mud pit?

The Wrap‘s Sharon Waxman reported yesterday that in the wake of Avatar‘s huge success, which is partly attributable to audiences being delighted with the 3D aspect, Robin Hood director Ridley Scott “is breathing down the neck of executives at Universal to get them to approve making a 3D version of his new $200 million epic,” at the cost of an extra $7 or $8 million.

I would honestly love to see an investment in a series of intimate, non-spectacle-level 3D remasterings. 3D should be a normal alternative to all quality films. I would kill to see a 3D Hurt Locker, for instance. Or a 3D Up In The Air. Or a 3D Network, Betrayal, Psycho, Rosemary’s Baby, etc. Imagine Richard Harris making love to Rachel Roberts and knocking over furniture in a 3D This Sporting Life — seriously.

Up In The Air opens wide today. Today’s tracking says definite interest is strongest among over-25 males (35) and over-25 females (32). Unaided awareness is also highest among these two groups. The across-the-board first choice number is only 4, however. That doesn’t calculate…or does it? It’s been playing limited and has gotten great reviews that have mentioned its Best Picture potential. And everyone is cool with George Clooney, and is open to a good adult-level movie with heart and smarts.

What’s behind the limited enthusiasm then? All I can figure is that the word is out on that final ten minutes, which hasn’t gone down well with some I’ve spoken to. The ending, as I’ve said over and over, is what gives Up In The Air its integrity — the thing that makes it linger in the mind. What does Kris Tapley have to say about this?

The fact that Precious is currently topping the Village Voice reader poll as the worst film of 2009 is clearly a major cultural bellwether with a thundering total of…6 votes. And yet hundreds have voted for the Best Picture winner so far (i.e., The Hurt Locker) and 69 have voted for Mo’Nique as Best Supporting Actress. This tells us that (a) most people feel it’s impolite to think or talk “negatively” so they refrain from doing so, and (b) once a presumed winner has been planted in people’s minds, they tend to sheep-vote their agreement.

The latest Envelope Buzzmeter predictions (voted on but not yet posted) have three Oscar-race bigmouths — myself, Notes on a Season‘s Pete Hammond and Awards Daily‘s Sasha Stone — asserting that James Cameron‘s Avatar will most likely win the Best Picture Oscar. Consult the latest (12.18) Gurus of Gold chart and you’ve got Hammond and Stone saying this again along with MCN’s David Poland.

So that’s four friends-of-Avatar along with three others — Indiewire‘s Anne Thompson, USA Today‘s Anthony Breznican and Hitfix‘s Gregory Ellwood — putting it in their #2 slots. That means they suspect it may be the front-runner but they’re hedging.

So if you want to be liberal about it Avatar has either persuaded or nearly persuaded seven handicappers that it’s the one to beat. Everyone else has decided to play it safe and hang back for the moment, or is flat-out convinced it can’t win over the blue-hairs, as Gold Derby‘s Tom O’Neil apparently feels.

I find it interesting that Entertainment Weekly‘s Dave Karger, easily the most conservative-minded, rely-on-past-performance Oscar Guru on the scene, is the one who’s given Avatar its lowest Best Picture-likelihood rating — a 6.

The Hurt Locker was never going to win the Best Picture Oscar because it hasn’t made nearly enough money. (Which is primarily due to a weak marketing effort by Summit Entertainment.) THL is also threatened because women in the Nancy Meyers wing of the Academy haven’t seen it or are reluctant to see it, or because it isn’t their kind of film. The Hurt lock is Kathryn Bigelow winning the Best Director Oscar.

Three factors are behind Avatar‘s ascendancy. One is that it’s a huge knockout spectacle that’s been raved about by most critics and seems poised to earn possibly a billion dollars worldwide. Another is that it’s one of those big-foot super-movies that have, in years and decades past, taken the Best Picture Oscar with a combination of sheer brawn, money, moxie and chutzpah — a large-penis movie in the tradition of Ben-Hur or The Greatest Show on Earth.

The third factor is how Up In the Air, a much quieter and more intimate film that draws on the job-market anxieties of the Great Recession, has seemed to lose steam just as Avatar has picked up some. I’ve been convinced since the Toronto Film Festival that UITA would take the big prize but now I don’t know. Obviously I don’t “know” anything but I’ve been sensing a distinct shifting of tectonic plates since Avatar was shown to critics on 12.10 and then began to clean up big-time. Monday’s $16 million haul may have cinched it.

Cue Mr. Beaks, Devin Faraci, the Auburn Plainsman‘s Ben Bartley and other Avatar slammers to gear up and lead the fight, Na’vi-style with bows and arrows on horseback (“aaayiii-yi-yi-yi!”), against the powers-that-be. Show us what you’re made of!

When I called the first Sex in the City movie “a Taliban recruitment film,” I was referring to a notion that young Arab men might be so repelled by its celebration of putrid 21st Century chick culture that joining the Taliban might seem freshly appealing. How curious, then, that a portion of the upcoming Sex and City 2 (opening 5.28.10) has triggered Taliban-ish associations by having the girls visit Morocco, an Arab-Muslim nation teeming with keffiyahs and camels and sand dunes.

It’s almost as if director-writer Michael Patrick King said to the New Line/Warner honchos, “I think we need to confront this Taliban thing head-on by taking the girls (Sarah Jessica Parker, Kim Cattrall, Kristin Davis, Cynthia Nixon) right into the belly of the beast. Well, Morocco, I mean, which looks like it’s in the belly. It’ll be a kind of joke, a way of confronting and maybe charming a culture founded on a spiritual creed that completely despises what Sex and the City is all about! I love it!”

And I’m not kidding. I really and truly believe that films like ’08’s Sex and the City (and, I’m sure, the upcoming sequel) reflect what’s seriously corrupt and poisoned about the values that our nation has come to represent since the get-all-you-can Reaganesque ’80s. Especially in these times with the mentality of wealth-flaunters being seen as one of the root causes of our economic calamity.

“The soul of this movie is [about] the flaunting of me-me egos and the endless nurturing of the characters’ greed and/or sense of entitlement,” I wrote on 5.28.08. “It’s all about money to piss away and flashy things to wear and lush places where the the girls lunch and exchange dreary confessional chit-chat. And this, mind you, is where millions of middle-class women in every semi-developed country around the globe live in their dreams.

“All I know is that I felt ashamed, sitting in a Paris movie theatre, that this film, right now, is portraying middle-class female American values, and that this somehow reflects upon the country that I love and care deeply about.

“It’s a kind of advertisement for the cultural shallowness that’s been spreading like the plague for years, and for what young American womanhood seems to be currently about — what it wants, cherishes, pines for. Not so much the realizing of intriguing ambitions or creative dreams as much as wallowing in nouveau-riche ickiness as the girls cackle and toss back Margaritas.”