James Cameron‘s Avatar will not enter the annals of box-office legend when it opens on 12.18, a seasoned analyst predicted this morning. “It’s looking like it will open in the upper range of all-time December wide releases,” he said, which translates into an opening in the high 60s to low 70s. This obviously means it won’t reach or top $100 million, he said, and it sure as shit “won’t come within ten miles” of The Dark Knight‘s $158 million opening weekend. 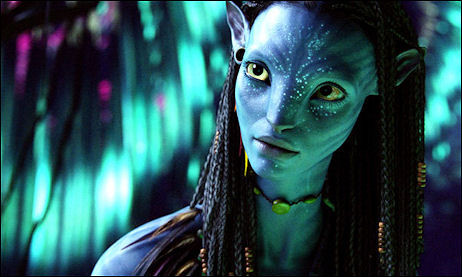 “If people are expecting Avatar to open to $100 million, their expectations are wildly unrealistic,” he said. “It doesn’t need to open to anywhere near that, and Fox isn’t expecting it to. Will it open to $30 million and be a disaster? Not a chance. At this point, it’s looking like it’ll open in the upper range of all-time December wide releases.”

I had expressed concern that Avatar‘s most recent first-choice tracking seemed to have stalled out at 16, and had asserted that a 30 first choice just prior to opening day seemed necessary for Avatar‘s box-office to match expectations. Not so, this guy replied.

Okay, I said, and thanks. But I’m left with a feeling that Avatar has heat but not serious heat. Not yet anyway. It’s not a monster waiting to happen and it’s not looking like a tank in relation to expectations, but Fox analysts aren’t likely to be all hyperventilating and giggly when they talk to trade reporters over the 11.18 weekend.

I’m detecting geek and teenage interest and not a whole lot more at this stage. A lot of people seem to be saying, “Yeah, I guess I’ll see it but I don’t know about those blue cat-goats with the Pinocchio horse ears.” Mainstream Eloi tend to avoid anything that looks even slightly challenging –the movie with the brightest and most colorful wrapper with the plainest design tends to win — and Avatar looks like something you might have to get used to on some level. It seems rich and dense, like a realm you might need to explore and maybe study a little bit to fully enjoy. That’s not an Eloi magnet factor. They like fast-food movies that they can wolf down right out of the wrapper– no thought, no nothing, just ketchup. They can see that Avatar is no easy-lay Roland Emmerich film. They can tell it’s a sit-down meal.

And it does look like a male geek thing — let’s face it. New Moon girls are not going to be breaking down doors to see this at first. (Maybe when their friends tell them this or that, but not now.) This may sound complacent or trite but the first wave of viewers is most likely going to be led by animation nerds.