After complaining about the murky image projected during last evening’s Sherlock Homes showing at the Regal Union Square Stadium 14, HE reader Gordon 27 replied that the RUSS “is the worst chain theater in NYC…everything they do nickel-and-dimes their customers, right down to the weak lamps in the projectors.” He acknowledged that “every chain does this to some extent” but claimed that the RUSS is far guiltier than most. 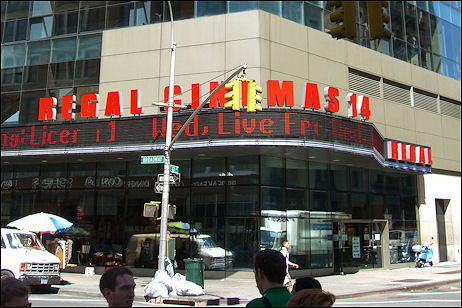 The RUSS is probably the worst I’ve ever been to in my life — worse than the AMC Empire on 42nd Street. The projection and sound levels are substandard, to put it gently. The rows don’t allow for sufficient leg room. The seats are too small. And the people who attend are largely riff-raff. Partly retirement-age Jews, partly screaming kids, partly nice couples, partly street homies, partly middle-aged, sullen-faced X-factor types, and partly wild African dogs from the Serenghetti, shouting and roaming around and eyeballing and “hey yo”-ing each other and carrying massive buckets of popcorn and super-sized cokes sloshing over the rim and onto the carpet and plastic floors…and I’m paying money to experience this?

If my only choice was to watch films at the Regal Union Square Stadium 14 or wait three or four months for DVD, I wouldn’t even think about it. Going to a place like this is torture. As soon as you walk in you’re thinking, “I’ve gotta get outta here.”

Perhaps we could take this opportunity to list the other exceptionally awful theatres in NY, LA and other burghs. Maybe we can come up with a top ten list of some kind.