After catching Jacques Audiard‘s A Prophet I ambled over to the Museum of Modern Art last night for Universal’s big It’s Complicated party. There was the usual trouble at the door (the security apes were even challenging Peggy Siegal, who had handled the celebrity invitations) but I was eventually waved in by Universal marketing big-shot Michael Moses. Once inside I was enveloped by sublime climatorial comfort and spiritual calm — a murmuring, beautifully lighted, abundantly catered heaven filled with the best or most talented or hungriest people in town, and everyone in a serene and approachable mood. 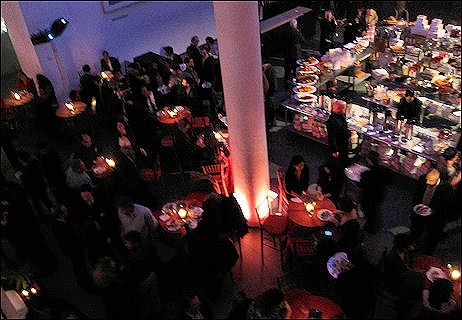 The stars were there, of course — Meryl Streep, Steve Martin, Alec Baldwin, Mary Kay Place. Everyone else was hovering and/or scheming to get closer, trying for a word or two, a moment’s grace, a touch of their garment. I didn’t see director Nancy Meyers but It’s Complicated producer Scott Rudin was there; ditto Universal honcho Ron Meyer. Tina Fey was in the hot-table area with husband Jeff Richmond. Barry Levinson was hanging around. And the food was delicious — roast beef, mashed potatoes, magnificent salads, pleasant wine — and plentiful as hell with several fully-staffed serving areas.

Columnists George Rush and Roger Friedman were looking for quotes, of course. It seemed from a distance as if Baldwin — obviously in good spirits but visibly sweating and clearly in need of a diet re-think and some daily treadmill time — wasn’t all that responsive to their conversation starters. I wasn’t feeling all that socially aggressive so I just wandered around and scanned the room. An instinct told me not to snap photos.

There were some other famous faces milling about. I chatted briefly with Oliver Stone (he asked what I thought of It’s Complcated, and told me he’s finished with Wall Street 2 and involved in a fast-and-furious edit). I also said hello to director-writer Paul Schrader, and talked at length with screenwriter Stephen Schiff and fiance Lois Cahall.