Bilge Ebiri has hit on something fairly big in an amctv.com article — Up In The Air is Intolerable Cruelty and vice versa, He mentions five big similarities in the piece (with spoilers!); this evening he passed along a few more by e-mail. 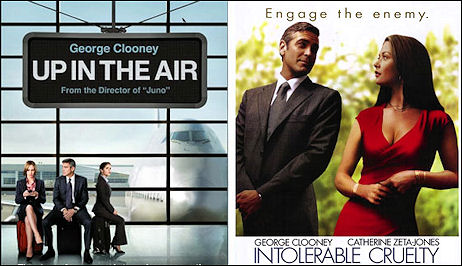 Up in the Air: Termination counselor Ryan Bingham travels the country firing people on behalf of other companies. He’s at the top of his field, and he’s best-known for a motivational speech he gives to various business groups about shedding all the material and emotional baggage in their figurative “backpacks.”

Intolerable Cruelty: Miles Massey is a divorce attorney who spends all his time coldly dividing (or seizing) marital estates. He’s at the top of his field, and he’s famous for “The Massey Prenup,” an iron-clad prenuptial agreement that protects wealthy spouses from losing their assets due to divorce.

Up in the Air: Alex (Vera Farmiga) seems to know as much about travel, frequent flier mile programs, and rental cars as Ryan does. But they’re both lonely, and they find themselves falling for each other in a more profound way.

Intolerable Cruelty: Manipulative, ice-cold lawyer Marylin Rexroth (Catherine Zeta-Jones) is initially on the other side of a divorce case involving one of Miles’s clients. But they’re both lonely, and they find themselves falling for each other in a more profound way.

Up in the Air: It turns out that Alex isn’t exactly the single road warrior she made Ryan think she was. Instead, she’s happily married, with kids — as Ryan discovers when, in a burst of romantic inspiration, he drops everything and surprises her at her house in Chicago.

Intolerable Cruelty: It turns out that Marylin has been conning Miles all along, and is just after his money — as he discovers when, in a burst of romantic inspiration, he drops everything and marries her.

Up in the Air: Ryan finally gets the chance to give his “What’s in Your Backpack” speech at the very prestigious Goldquest Convention. But after taking the stage, he realizes that he loves Alex and no longer believes his own cynical spiel.

Intolerable Cruelty: Miles has to keynote the annual convention of the National Organization of Marital Attorneys Nationwide. But after taking the stage, he realizes he loves Marylin and no longer believes his own cynical spiel.

Up in the Air: Ryan is about to be grounded for good thanks to a newfangled virtual firing system…but then someone they fired earlier commits suicide. Faster than you can say “deus ex maquina,” the new system is scrapped, and Ryan goes back up in the air.

Intolerable Cruelty: Miles is about to lose everything he’s got after Marylin decides to divorce him. But then Miles’s former client and Marylin’s ex-husband has a sudden heart attack, she comes into a ton of money, and Miles gets the upper hand in their divorce proceedings.

Extras: (a) Loaded exchanges with airplane crews (the stewardess saying “you’re gonna win” to Clooney and later saying “you didn’t win” to CZJ; the conversation with Sam Elliott-as-god in UITA); (b) The

craven boss who likes to quote statistics; (c) The earnest travel companion (Clooney’s fellow lawyer in Intolerable Cruelty is less severe than Anna Kendrick in UITA but they’re both essentially earnest professionals who have bought into their companies’ official lines of bullshit).