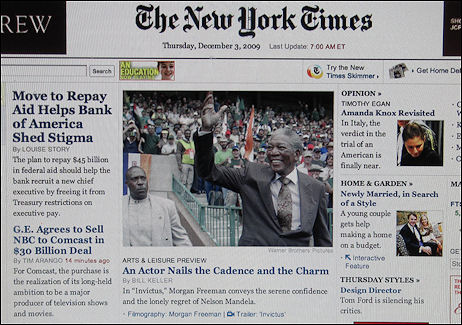 Keller knows Mandela quite well personally, having been the Times‘ Johannesburg bureau chief from ’93 to ’95, so his opinion obviously carries some weight and authority. What he’s done, in effect, is to heartily endorse Freeman as a Best Actor contender in this year’s Oscar race. I’ve heard some arguments against Freeman over the last two or three days — his Mandela is appealing but “thin,” the film gives him nothing to play, etc. — but Keller’s article could turn things around. Maybe.

“Morgan Freeman has been cast as God — twice — so he evidently has no trouble projecting moral authority,” Keller writes. “The challenge of portraying Nelson Mandela, then, was not the size of the halo, but knowing the performance would be measured against the real, familiar Mandela, and his myth. ‘If we can say any part of acting is hard, then playing someone who is living and everybody knows would be the hardest,’ Mr. Freeman said in a phone interview.

“The role has defeated actors as varied as Danny Glover (the 1987 TV film Mandela), Sidney Poitier (Mandela and de Klerk, 1997, also for TV) and Dennis Haysbert (Goodbye Bafana, 2007), in vehicles that were reverential and mostly forgettable.

“But as someone who studied Mr. Mandela over the course of three years while he replaced an apartheid regime with a genuine democracy, I found Mr. Freeman’s performance in the film Invictus, directed by Clint Eastwood, uncanny — less an impersonation than an incarnation.”

Keller’s story is dated 12.6, so it’ll be in this Sunday’s print edition.