Pretty much everything on Pandora, the tropical-rain-forest moon in James Cameron‘s Avatar, is either “inspiring and dangerous,” to listen to Sigourney Weaver‘s narration in this travelogue piece. But it seems a little too crammed with scary predators. And too effin’ noisy. To me anyway. 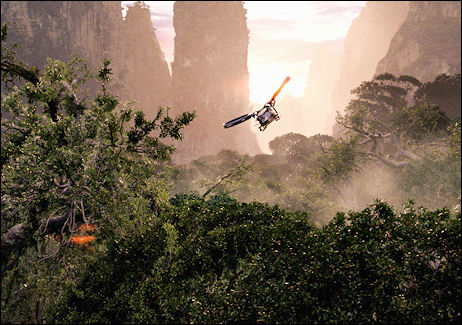 Outside of the Na’vi, those glowing dandelion fuzzies and the six-legged direhorses, Pandora seems to be all about hexapods, flying banshee dino-birds, viper wolves, those dino-hammerhead guys, the especially dreaded thanator, etc. What about the grazing animals — the Pandoran equivalent of elephants, giraffes, wildebeests, zebras, etc.? What about the Pandoran monkeys and benign birds and silent slitherers and small burrowing mole-type animals?

And why do the Pandoran predators have to howl and growl and roar all the time? I’ve almost gotten to the point of muttering “will you shut up?” as I watch those trailer clips of Sam Worthington‘s Na’vi being chased through the jungle as his pursuers yowl and bellow and shriek. Predators — hello? — are silent when hunting because growling eats up oxygen and wind power. They primarily growl when they’re defending their turf or trying to scare off other predators from taking their food.

Think about how much scarier it would be if the Pandoran monsters were silent as they chase Worthington around. A very cool thing. But no — the CG culture (those highly paid guys sitting around their flatscreens and doing exactly what the other highly paid guys on the last super-CG epic have done) has decided that all scary creatures must bark and howl at all times because the fanboy multitudes have been trained to expect this going back to King Kong and would be thrown for a loop if they didn’t. “Hey…I want my digital lion roar!” Make no mistake — the FX community is defined by institutional follow-the-leader instincts first and genuine creativity second.

Pandora, says Weaver, is “a dreamlike landscape reminiscent of a Magritte painting.” (It’s called “Castle in the Pyrenees.”)

“Vast magnetic fields…unobtainium….bio-luminescent…Greek mythology…the Pandoran ecology works and communicates like a nervous system, suggesting that amid the savage and fierce creatures…this strange bewitching polace might hgld hope for ourselves, our planet and the fturue of all living things.”