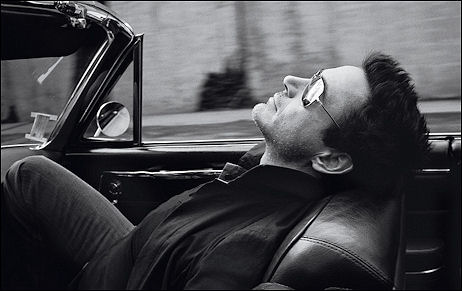 Ritchie: “You really got your hands dirty on this shoot. In fact, you got punched in the mouth — seven stitches. And you didn’t fuckin’ cry like a baby. You just spat a bit and carried on. That was a shift in my attitude toward you, too. I thought, Okay, that changed the paradigm. Because you get paid a lot of money. I get paid a lot of money. And we’re indulged with the things we’re indulged with. From my point of view, we have the best jobs in the world, and I suspect you think so, too.

Downey: “I love it. But what did I do when I got that big cut? I just hoped it was deep enough that it was going to need enough stitches to get your approval. I was nowhere near the cosmos for about 12 seconds. Then I think I peeled my lip inside out, and I was so happy to hear you say, ‘That was the best fight.'”

Ritchie: “I was happy to be the guy who said, ‘Oh, that needs stitches,’ because usually I’m the guy who’s like, ‘Oh, fuckin’ stitches–don’t worry about it.’

Downey: “We needed to finish whatever we were doing. I wish I had bled more, to tell you the truth, but that might have alarmed other folks. It was kind of a coming of age for me — thinking of being not 22 but 44. But I very well remember going to the hospital.”

The awkward/dull parts were trimmed out by Sam Donelly; the photos are by Sam Jones.