L.A. Times critic Kenneth Turan‘s comparison of James Cameron‘s Avatar to The Jazz Singer will have a profound impact on the Best Picture race, I suspect. Among those over-50 Academy members who listen to and occasionally follow his lead, I mean. 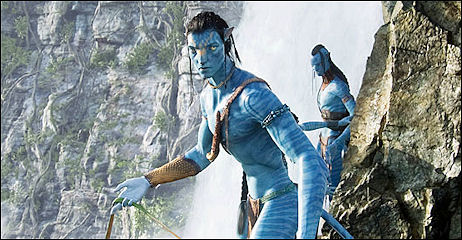 The instant I read his review I began to think that if the ABTHL crowd (i.e., anything but The Hurt Locker) decides that they can’t fully embrace Up In The Air because of its admirable refusal to go all warm and huggy during the final ten minutes, they might just throw their support behind Avatar as a tribute to Cameron’s boldly visionary historical-leap-forward. We’re clearly looking at a three-picture race right now. Only an Oscar-handicapping ostrich would deny that Avatar is now a major contender for Best Picture.

“Whatever way you choose to look at it, Avatar‘s shock and awe demand to be seen. You’ve never experienced anything like it, and neither has anyone else.

“Say what you like about writer-director Cameron — and take it from me, people have — he has always been a visionary in terms of film technology, as his pioneering computer-generated effects in The Abyss and Terminator 2: Judgment Day testify. He is not a director you want to underestimate, and with Avatar‘s story of futurist adventures on a moon called Pandora, he restores a sense of wonder to the moviegoing experience that has been missing for far too long.

“An extraordinary act of visual imagination, Avatar is not the first of the new generation of 3-D films, just as Jazz Singer was not the first time people had spoken on screen. But like the Al Jolson vehicle, it’s the one that’s going to energize audiences about the full potential of this medium.

“That’s because to see Avatar is to feel like you understand filmmaking in three dimensions for the first time. In Cameron’s hands, 3-D is not the forced gimmick it’s often been, but a way to create an alternate reality and insert us so completely and seamlessly into it that we feel like we’ve actually been there, not watched it on a screen. If taking pleasure in spectacle and adventure is one of the reasons you go to the movies, this is something you won’t want to miss.”