“The evidence is indisputable, writes Vanity Fair‘s Leslie Bennetts, “that Meryl Streep, at age 60, has become the industry’s new box-office queen.” Absolutely, yes…for over-35s who go to the movies. Educated couples, singles, women in groups, etc. It’s a different story with most of the under-25 Eloi, of course. They know Streep as the white-haired bitch in The Devil Wears Prada, I would presume, but she’s not of their own and therefore a “meh” in terms of marquee value. 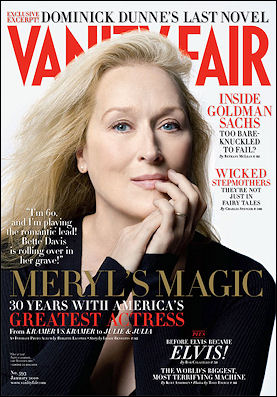 The Eloi are not just another age group — they’re another species.

But yes, of course — Streep matters big-time with older viewers. The mostly grotesque Mamma Mia!, Bennetts reminds, has grossed $601 million worldwide. Prada has earned $324 million around the world. This year Julie & Julia has tallied $121 million. And everyone knows that It’s Complicated is going to clean up.

Streep “broke the glass ceiling of an older woman being a big star — it has never, never happened before,” says director Mike Nichols.