A little while ago I emerged from Taika Waititi‘s Boy, which is now, I’ve decided, the other strong-recommend film I’ve seen so far at Sundance 2010 (on top of Get Low). The third apparent winner, to go by the buzz, is Catfish. The problem is that I have a hard ticket to Four Lions, which will begin at the Egyptian at 5:30 pm. It’s now 4:40 pm so I have no time to write anything. 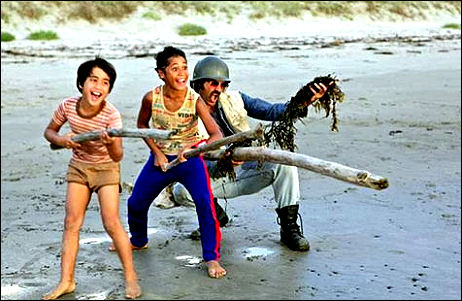 I have time to say one thing. Waititi has a little bit of Wes Anderson in him. The movie is as freshly felt and stylistically alive as Bottle Rocket and Rushmore did in the mid to late ’90s.

Here’s a link to Julian Sancton‘s review of A Boy on vanityfair.com. I agree with pretty much every word. I’ll be sitting down after Four Lions and tapping out impressions of both films.