Youth in Revolt didn’t open all that strongly last weekend, coming in ninth with $6,888,334. The Weinstein Co., I realize, is having a tough enough time without me piling on. I’m mentioning this merely to note that Michael Cera hasn’t exactly grown into a semi-reliable box-office attraction, and that nothing has happened since Superbad to grow or even fortify his brand. 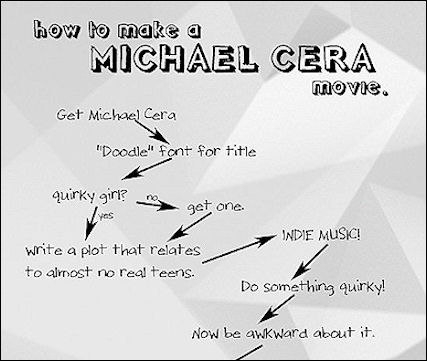 Fourteen months ago I suggested that he might be “two or three steps from being over, which is to say two or three years from being completely done.” Nothing has changed since, and things have in fact gotten a little worse. Paper Heart was deadly. The Year One didn’t connect. There’s another “Michael Cera fillm” coming out this year — Scott Pilgrim vs. The World ( about a guy who “must defeat his new girlfriend’s seven evil ex-boyfriends in order to win her heart”) — but how long can this go on?

Cera isn’t catching fire. At best he’s simmering; at worst the fire is already out. Whatever heat Cera might have had in September 2007, there seems to be less of it now. Is there anyone in the film industry more famous for being a one-trick, one-attitude pony who sorta kinda doesn’t like being famous?

The solution is in facing facts. Cera is not a leading man, and he never will be. He’s very dry, droll, passive, low-energy. He needs to team up with Jonah Hill (or someone who’s got that same neurotic-and-mouthy in an anxious, high-energy way deal going on) in order to get that Superbad thing back. Without a doppleganger Cera is incomplete. Dean Martin without Jerry Lewis, Stan Laurel without Oliver Hardy, Bud Abbott without Lou Costello, etc.