AJ Schnack invited me to last night’s 2010 Cinema Eye Honors at the Times Center on West 41st Street, and not only that — I went! Louie Psihoyos‘ The Cove won the best feature doc award. Women who’ve refused to see The Cove so far should not let this get in the way. If they don’t want to support a film that’s trying to wake people up about some ghastly goings-on in Taiji, Japan, that’s their right. Box-office democracy! 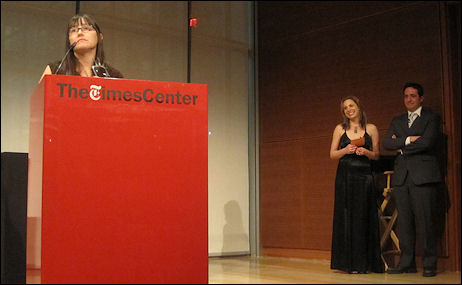 Schnack charmed the audience (more or less) with a game of MadLibs that went on for eight or nine minutes. Schnack later tried a visual joke about fried chicken that totally bombed. I need to add that I respect Schnack’s ballsiness in trying to get a laugh out of feigned indifference to the torturing of Purdue chickens. This was the kind of error that only a confident and slightly mad host would have even attempted. Good on that.

The Cinema Eye show was projected to last 90 minutes. It went on for two hours and 20 minutes.

The technical name for the big whoa-ho award that The Cove won is “Outstanding Achievement in Nonfiction Feature Filmmaking.” Louie didn’t show, and neither did Fisher Stevens. The award was accepted (I think) by Paula DuPre Pressman.

The winner of the Outstanding Achievement in Direction award went to Agnes Varda for The Beaches of Agnes. Varda didn’t show but this didn’t feel like a big issue. Varda’s substitute was very gracious. The vibe was “we be fine, everything is fine.” And there was a noisy disco-inferno party afterwards. 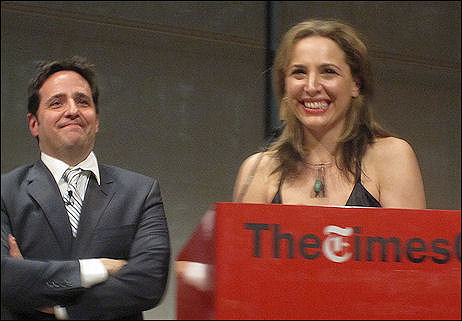