I’m not going to try to out-describe a riff by DVD Beaver’s Gary Tooze on the Sopranos Complete First Season Bluray that I got for Christmas. I can’t help being impressed by “it’s like watching an Ektachrome slide show in perfect continuous motion” — that’s a very good line. So is “the resolution is so good that we are aware of no pixels, just substance.” 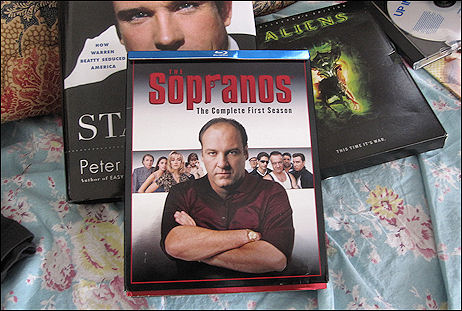 Beyond the obvious Blu-ray factor, the reason for the exceptional clarity is that The Sopranos “was very directly filmed, without massive quantities of post-production filtering and manipulation,” he notes. “We are just that much closer to the source here than many of today’s movies. The Sopranos has more in common with a motion picture feature than a television series, so it makes sense that it should look like film, despite that it’s undergone transition and compression with a digital interface presented through a digital medium. Grain is very tight, but image resolution is tighter; impression is voyeuristic, which, I am certain is the intention.”