Documentary distribution has always been a hard row to hoe, but one look at the website for Gerald Peary and Amy Geller‘s For The Love of Movies — an intelligent, reasonably comprehensive, emotionally subdued history of American film criticism — and your heart just goes out. They’re doing this all on their own, and you can feel the budgetary scrimping in every corner of it. The DVD market is a feast-or-famine proposition. For the smaller titles it’s clearly rough and tumble. 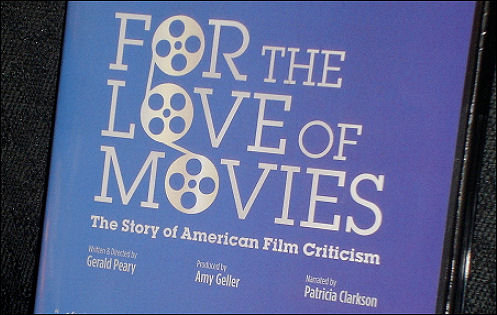 But my reaction was finally one of admiration for Peary and Geller’s diligence, which was essentially my response to the film itself when I reviewed it last spring. And I like the no-frills jacket cover, which makes it look like an industry screener. But I’m not so sure about Bobby B. Keyes‘ original soundtrack, which sounds too laid-back and mellow and old-farty for a saga such as this — i.e., the rise and fall of a 20th Century art form that serious impacted the fortunes of thousands of films over a 75 year-period, give or take.

“For those who know a lot about the American film-critic monastery, For the Love of Movies is a tidy and agreeable canoe ride down memory creek,” I wrote last March. “With a tinge of melancholy, I should add, although this comes more from my own feelings.

“Peary and Geller, to put a point on it, have chosen not to emphasize the dominant reality facing established film critics in the 21st Century — i.e., the extinction of the monk-like film critic cabal as it was known and defined from the late 1930s and ’40s to the beginning of this century, and the drop-by-drop diminishment of the power and prestige of the traditional film critic. Which is due, obviously, to the winding down of the Gutenberg era, blah blah. With some critics and columnists adapting to the new technological climate (ahem) and some not so much.

“Clearly we’re looking at the end of the road here, certainly for the elite culture portrayed in the film.

“The prime kiss-of-death factor is a diminished interest among today’s tweeting, texting, 24/7 digital-feed generation in being passive recipients of the views of learned, brahmin-like, know-it-all film critics dispensing ivory-tower insights. Economic issues aside, the firing of film critics is rooted in today’s common-currency belief that everyone and anyone with a computer or hand-held device knows as much as those snooty-ass critics do. Or certainly that their opinion is just as valid, and that they prefer a more democratic, interactive bloggy-blog conversation as the dominant mode of dissection and discussion.”