“I’m fairly certain When in Rome (1.29) was not originally intended to be a theatrical motion picture,” writes OK magazine’s Phil Villarreal, “but a propaganda film meant to twist your mind into hating many things: Kristen Bell, the city of Rome — nay, the entire populace of Italy. And possibly life itself. 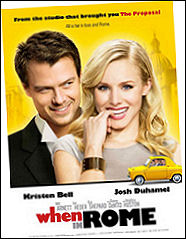 The Touchstone release is basically “a weak rehash of Love Potion No. 9, with Love Potion No. 9 replaced by crack. Random plotting, insipid dialogue and pathetic acting conjoining to become a medieval torture device in movie form.

“How bad was it? My friend’s easily impressed wife, who once called Get Smart the funniest movie she’s ever seen and actually enjoyed Leap Year, wasn’t all that high on it, dismissing it as ‘gimmicky.’

“Translation: It’s the worst movie ever created, with the possible exceptions of Hellboy II and the Super Mario Bros. movie.”