Two or three days after linking to Stu Van Airsdale‘s 1.18 Movieline critique of Carey Mulligan‘s Best Actress campaign, I got a “what the hell?” e-mail from a friend at Sony Classics. I tried to get into this during Sundance but the screenings and deadlines were overwhelming, as usual. 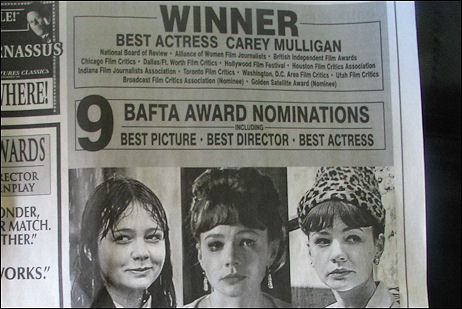 “We have several weeks of voting after the Oscar nominations are announced,” he said, “so the Best Actress game is not over. It’s not even half-time yet. We were one of the first to send An Education to the complete SAG membership. And consider Capote‘s or Rachel Getting Married‘s release plan at Oscar announcement time. We were roughly at the same place with these films, and with the same odds.

“And look at all the awards Carey has accumulated so far (including her BAFTA Best Actress nom) and consider a scenario in which Sandra Bullock and Meryl Streep split the mainstream Hollywood vote, and Carey wins by getting the rest. Don’t think that couldn’t happen.

I didn’t think I was pointing figures at these guys — not really. I was just linking, for one thing. And all I said boiled down was that Sony Pictures Classics co-chiefs Tom Bernard and Michael Barker are “known to be equitable and hands-offish when it comes to acting-awards campaigns.” In other words, they’re not Weinstein-type blitzkreigers, and that they tend to defer to an actor’s personal publicist. No biggie in that.

I was mainly expressing my disappointment with the fact that so many critics groups had given their Best Actress awards to Streep, and for a relatively minor performance. Does Sandra Bullock have a front-runner position now after the SAG win? Quite possibly. Mulligan will be nominated for Best Actress, of course. She’s received a huge launch from An Education, and the film will continue to benefit when it goes to video. If she doesn’t win, fine. It’s all been to the good.