I should have linked right away to Sharon Waxman‘s 1.7.09 report on the sad passing of Cathryn James, the ex-manager of Quentin Tarantino. I spoke to James three or four times in the mid ’90s about her Tarantino history, and I remember that she was intellligent and frank and, as far as I could tell, a nice person (if a bit frail). 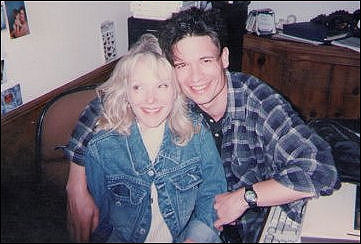 Waxman’s piece recounts the story of how Tarantino dropped Jaymes as his manager after his career began to take off. She took it extremely hard, and it may be true, as Waxman suggests, that her health suffered as a result. “Although many knew that Tarantino fired Jaymes abruptly on the brink of his greatest success with Pulp Fiction (a story I recount in “Rebels on the Backlot”), few knew that she contracted virulent breast cancer in the year or so after her brutal separation from the director.

“She chose to have a radical mastectomy but slowly bowed out of the business. I know that Cathryn believed, and it didn’t take much to convince me, that what she considered a shocking betrayal by Tarantino contributed to her illness.”

What Tarantino did was cruel, but stuff like this happens. All is fair in love and war and talent management, and anyone will tell you that kind and decent people sometimes take it in the neck in this town. Hollywood is filled with electric eels, and sometimes your Boy Scout (or Girl Scout) merit badge won’t get your client where he/she needs to go. Watch Kirk Douglas fuck Barry Sullivan in The Bad and the Beautiful — not pretty and in fact pretty cold, but the heat in the Hollywood kitchen makes people sweat 24/7. The more money, power and glory there is to be had, the worse people behave. Especially those who aren’t terribly nice people to begin with.

But I don’t think that even a fragment of a case has been made that Quentin Tarantino hurt or weakened Cathryn Jaymes to such an extent that her body wasn’t strong enough to fight off breast cancer. Are all illnesses psychological? They seem to be in some cases, but people get sick for all kinds of reasons, and it’s really not fair to draw linkage between a hurtful but common practice (i.e., manager-shucking) and a person’s illness or passing. If a person psychologically gives up — if they don’t have the fight to keep moving despite hurtful setbacks — that is their decision alone.

Still, it’s not helpful to be thought of as a prick. I don’t know how this episode will play among Academy members (who know, after all, how this town works politically and how some have clawed and back-bitten their way to the top), but I can’t see how the recent articles about Jaymes by Waxman and Don Murphy aren’t at least a slight problem as far as Tarantino’s Best Director chances are concerned.