The Sundance press notes describe Derek Cianfrance‘s Blue Valentine, which had its big press screening last night, as “an intimate, shattering portrait of a disintegrating marriage.” That sorta works if you leave out “shattering” and replace it with “heavily affected in a way that may be tolerable for some viewers, depending on their tastes and limits.” 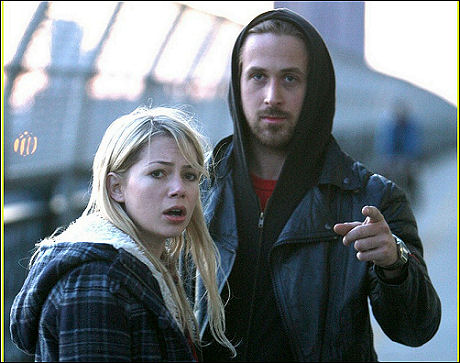 It’s an old-fashioned arthouse relationship movie with next to no story but an intensely observational art-bubble thing going on in which we’re shown a relationship between Ryan Gosling and Michelle Williams in two time periods — young, hot and feverishly in love and somewhat older, frustrated and not in love or certainly less so.

And on and on it goes for two hours. Back and forth, back and forth with lotsa stylistic coolness. I was in and out of it — admiring the naked emotionalism at times, dozing off, hating being in the world of another twitchy and heavily mannered Gosling performance with cigarettes, checking my watch, sitting there like a Val Lewton zombie and half-wishing I was somewhere else. But knowing at the same time I was watching a pretty good film, or certainly one made by some undeniably talented folks who would rather shoot themselves than make another relationship movie in the same old way.

For the most part Blue Valentine is about Cianfrance showing off his John Cassevetes chops — one deep invadin’, high falutin’ close-up intimacy moment after another with the camera doing the old duck-and-weave.

It’s basically about Gosling and Michelle Williams giving us their acting-class utmost as a couple of not-very-bright instinctuals who want each other and lah-dee-dah-dee-dah and then they’re older and life is harder with the burden of the cute little daughter and all. I couldn’t tell what was wrong except for Williams being frustrated with Gosling’s blue-collar complacency and Gosling going “whassa matter?….wait, wait, whassa matter?” and smoking so many damn cigarettes (even while holding his daughter) that I wanted to pick him off with a high-powered rifle. 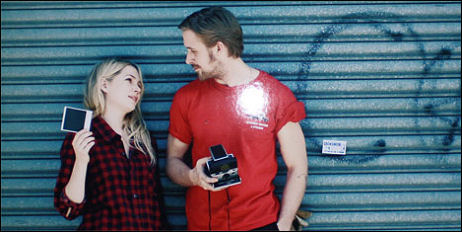 Gosling drives me nuts every time. He’s always doing that rop-bop-a-loo-bop, always focused on behaving in his own particular way and making damn sure that we notice this.

Gosling is inventive and never predictable, and I’m going to loathe him for years and years to come for this very nimbleness, this determination to imprint and infiltrate each and every film he’s in with a Ryan Gosling mood spray. He’s a behavioralist who lives inside a very deep mine shaft, and when he takes over a movie (as he does this one) you’re suddenly deep in that mine with him and noticing that air is thin and wondering why but feeling it might be time to get the hell out of there, and yet knowing this would be heresy because Gosling is, at the end of the day, a very intense presence with a very shifty bag of tricks that most other actors would never devise, much less resort to.

I felt like I needed some kind of flu shot after watching 30 or 40 minutes of Blue Valentine. By the end the flu had totallly taken over my system. I felt defeated, spent. But it’s a pretty good film. There’s never a moment in which you’re saying to yourself “this is crap, I can’t take this.” What you’re saying is “this a high-end thing made by some fiercely committed people, and I can barely stand it.”

I especially admired Gosling’s receding hairline in the parts in which he’s somewhat older. The whole time I was wondering if Gosling’s hair is really thinning and that he wore a hairpiece for the youthful scenes, or if he and Cianfrance decided to have his head partly shaved and then have the makeup guy give him a very realistic thinning-hair coif. Either way I was mesmerized. Blue Valentine deserves some kind of special commendation for this aspect alone.