Earlier today And The Winner Is columnist Scott Feinberg asked Kathryn Bigelow and James Cameron to comment on the similarities between Strange Days and Avatar, the plots of which were both hatched sometime between ’94 or ’95.

As mentioned earlier, Quentin Tarantino had the best story-telling riffs during today’s “Directors on Directing” panel discussion at Santa Barbara’s Lobero theatre. I’m posting three Tarantino excerpts here. I’m sorry I missed his boast about being the owner of the only repertory house in Los Angeles (i.e., the New Beverly) and how he’ll “burn the place down” before he shows anything there with digital projection.

The first [above] is a story that Brian DePalma told him about his feelings in 1980 regarding Blow Out vs. Raging Bull. The second is a story about how he had to prove himself during his first week of shooting Reservoir Dogs. The third is a thought about how Avatar‘s 3D photography might have affected Kill Bill.

2 Comments
“Waiting To Be Offended”

For those who don’t own the Criterion DVD of Stanley Kubrick‘s Spartacus (or who’ve never watched the extras), this Peter Ustinov recollection contains a funny, must-see Charles Laughton impression plus two or three stories about Laughton during pre-production and principal.

We all know that Hurt Locker helmer Kathryn Bigelow has been uninterested in playing the gender card when asked about her potential to become the first woman to win the Best Director Oscar. And The Winner Is columnist Scott Feinberg is nonetheless running quotes from three female directors — Gina Prince-Blythewood (The Secret Life of Bees), Kimberly Pierce (Boys Don’t Cry, Stop-Loss) and Heidi Ewing (Jesus Camp, 12th and Delaware) — about Bigelow being on the precipice.

10 Comments
Not Half Bad

I’ve just come from the “Directors on Directing” panel discussion at the Lobero theatre. A good one. Quentin Tarantino delivered the most entertaining riffs; Kathryn Bigelow and James Cameron, sitting beside each other, were a kind of tag team and ranked a close second. The other panelists were Lee Daniels (Precious), Pete Docter (Up) and Todd Phillips (The Hangover). It was moderated by Variety‘s Peter Bart. 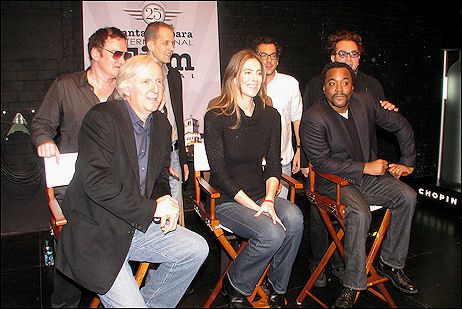 As if by magic or cosmic intuition, yesterday’s suggestion that Santa Barbara Film Festival tribute ceremonies could use a little less discipline and perhaps unfold less smoothly and uniformly came true hours later during last night’s James Cameron tribute at the Arlington theatre. And everyone played their parts beautifully.

Except for the show starting almost 35 minutes late (i.e., around 8:35 pm), almost nothing happened as planned. Cameron began delivering his acceptance speech at the get-go as host Leonard Maltin stood on the opposite side of the stage, delivering one of the most elegant and controlled “what the fuck is going on?” emcee performances I’ve ever seen. (Somebody had mistakenly told Cameron to offer his profound thanks at the get-go.)

After four or five minutes Maltin called out to Cameron, “Sorry, but you’re stepping on my act! I’m supposed to be asking questions!” (Or words to that effect.)

The film clips (Aliens, The Terminator, T2, Titanic) were shown somewhat out of sequence, and again — it was like jazz. The feeling in the room was giddy, liberating. Half of the red punch had splashed out of the bowl and splattered on the floor, and the feet of Maltin and Cameron and some of the senior staff were damp with it. It wasn’t quite on the level of the Marx Bros. A Night at the Opera, but it was sneaking up on that. Sometimes life is not a West Point reville formation.

And then Cameron’s q & a with Maltin had to be interrupted to allow Gov. Arnold Schwarzenegger to present Cameron’s Modern Master award hastily, before the Santa Barbara airport closed. Silhouetted figures scampered out from backstage to confer with Maltin while the clips were playing. If I had a special mike I would have probably heard festival p.r. chief Carol Marshall say, “Pssst! Leonard! Governor Schwarzenegger has to leave now…cut short your discussion of Sigourney Weaver‘s riveting performance as Ripley or whatever…I know we didn’t plan it this way…of course!…but he has to deliver his speech now!”).

Perhaps I’m slightly exaggerating the feeling of disorder, but it was certainly noticable and amusing — a feeling of “this isn’t in the script.”

We all think we need order and prudence in our lives, but what we really need is an occasional shot of uncertainty or even chaos to clean the blood out. Nights like last night make existence on this planet seem like the ribald and foolish farce it actually is deep down. They force everyone to think quickly on their feet, and transform fleeting anxiety into humor and sparkle and goobah-goobah-goobah. Please, give us more tribute sessions like this!

I was sent to the wrong after-party (i.e., a second-tier gathering on the Santa Barbara pier) but I eventually figured things out and made my way over to the correct one. I had a great chat with Cameron (which included a somewhat clumsily-spoken woman coming up to him and blurting out a complaint about Avatar) but I can’t share until later.

I have to drive a friend down to Point Dume and then turn around and be back by 10 or 10:15 am in order to get to the Directors panel at the Lobero theatre, which starts at 11 am. It’s now 7:03 am.