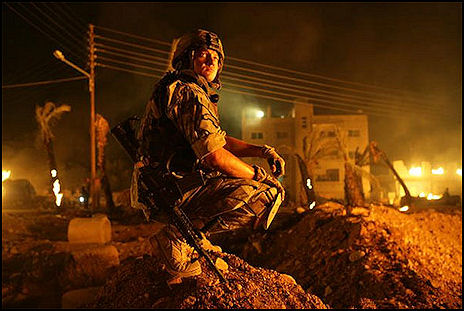 There’s a riff about cops that I may have read in a Joseph Wambaugh book. It goes something like “poets, priests and politicians talk about what people might be, could be, should be, try to be. Cops deal with people as they are.” (If it’s not from Wambaugh, fine…whatever.) In this sense I feel a kinship with the law. No offense to 98% of HE talkbackers, but dealing with the talkback uglies really does affect your view of humanity to some degree. I’ve had the talkback thing going for almost four years now (it began in March ’06), and dealing with dozens of Mr. Hyde types, year in and year out, starts to affect your emotional makeup after a while.

Peter van Aftmael‘s snap of Jeff Bridges signing autographs outside the Santa Monica American Cinematheque — dated 1.16.10 — is easily the best shot in the N.Y. Times’ Sunday Magazine‘s 7th annual tribute to great performers. The Times web guys don’t allow you to save the image (typical) so Alexander Carter sent me a decent scan. 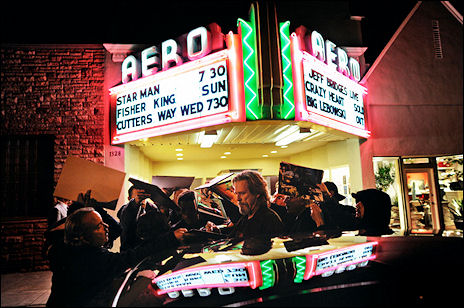 Along with Avatar, Inglourious Basterds, Star Trek and Up, The Hurt Locker is nominated for a sound-editing Academy Award,” notes N.Y. Times staffer Virginia Heffernan. “For its cerebral, abstract and still deeply romantic sound tableau — a kind of sonic Cy Twombly painting — The Hurt Locker should win it.

“Sound editor Paul Ottosson‘s alignment of death and silence, instead of death and booms, partakes of an aesthetic based on the idea that you’re deaf when you die. On The Sopranos, a series known for its exquisite deployment of silence, Bobby Baccalieri says of dying, ‘You probably don’t hear it when it happens.’

“The Hurt Locker is not cool. It’s hot and dry, a heaving desert parable with a mounting sandstorm howl at the center. The internal explosions matter more than the fireworks.

“Explaining the dynamics of roadside bombs in Iraq, Ottosson told Variety, You die not from shrapnel but the expanding air that blows up your lungs.’

“The top notes in the Hurt Locker soundtrack are arid metallic clicks, snips, squeaks and creaks, the chatter of wrenches and wire clippers, as bombs are defused in air so parched as to seem combustible itself. Men can hardly summon the spit or breath to speak.

“Much of the dialogue — which was almost all recorded on location in Jordan (and not looped in a studio) — is delivered in headsets, as soldiers hiss into one another’s helmets across desert expanses. To listen is to enter machinery, rib cages, ear canals and troubled lungs.”

In a 2.16 interview with Zaki Hasan (i.e, Zaki’s Corner), The Wolfman director Joe Johnston complains about something I and Roger Ebert and others have moaned about before — the deplorable tendency of commercial exhibitors to turn down the projection-light levels, which degrades the values in the film being shown.

“Standard projection brightness is intended to be 16 foot lamberts,” Johnston says. “This is a measurement of the amount of light reflected off the screen, back into a light meter. Projection bulbs are expensive, and if the urban myth is correct, there is a near monopoly on them so the manufacturer can name their price, which I’ve heard is around $400 each. These bulbs last longer if the current surging through them is dialed down, resulting in reduced foot lamberts which of course means a darker screen and a less vibrant image.

“The exhibitors save money by needing to replace projection bulbs less often and the filmgoing public gets a less satisfactory experience. You would be shocked to see the difference in image quality between 16 and 12 foot lamberts, 12 being a common meter reading at a lot of chain theaters. Only a few of the big premier theaters even bother to ‘read the screen’ and keep the brightness where it’s supposed to be.”

I was told a few years ago that some theatres actually dial the foot-lambert levels down to 10 or lower.

“People who love movies and want their money’s worth should demand that theater chains keep the brightness levels where they should be. Exhibitors should have a choice of who they buy the bulbs from, there should be market competition to bring the price down, and someone should invent a projection bulb that will only work at 16 foot lamberts..” Excellent idea, that last one.