You may think you’ve absorbed all you can of the appalling Sarah Palin, but John Heilemann and Mark Halperin‘s Game Change manages to up the ante. Their account of her behavior during the ’08 campaign is — no exaggeration whatsoever — mind-blowing. Particularly their reporting in the chapter called “Seconds in Command,” which starts on page 395. Palin is portrayed — quite convincingly — as an astonishingly arrogant cretin. 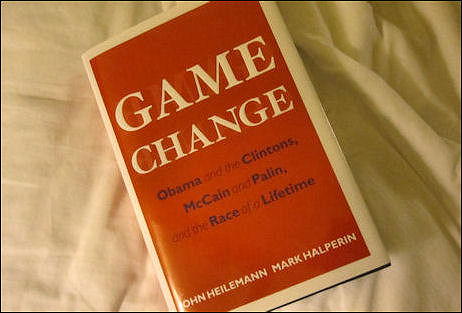 Realizing she urgently needed to prepare big-time for upcoming press interviews, McCain campaign staffers Randy Scheuneman and Steve Biegun “sat Palin down, spread out a map of the world, and proceeded to give her a potted history of foreign policy,” it says on page 360. “They started with the Spanish Civil War, then moved on to World War I, World War II, the cold war and what Scheuneman liked to call ‘the three wars’ of today — Iraq, Afghanistan and the global war on terror.

“The tutorial took up most of Monday, starting early and going late. When the teachers suggested breaking for lunch or dinner, the student resisted. ‘No, no, no, no…let’s keep going,’ Palin said. ‘This is awesome.'”