The Wolfman cost a ton of money (something close to $100 million), and it makes you feel like you’re stuck inside a deep stone pit with Universal werewolves prowling back and forth and worrying about the grosses. Rowwrrlll! — make it shorter! Rowf! — let’s throw in another beheading! Owwooooohhll! — we need to at least get those research scores into the 70s! Let’s bring in Walter Murch…snarrrrrll! 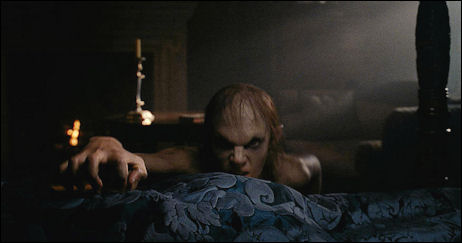 You can’t say it doesn’t look great — every scene is expertly smothered in fog and smoke and ominous shadows, or is lit by candles. Cheers to cinematographer Shelly Johnson and production designer Rick Heinrichs. But it makes you feel trapped, confined, shackled.

I saw it with an Eloi crowd (i.e., radio promotional) at the Grove last night, and after 20 or 30 minutes the room had no pulse. The crowd watched, waited and seemed to be saying, “This is it? This? Well, we paid to see it so we might as well stick it out but this just isn’t happening, man. Where’s the juice? This thing is just…what is it?”

Benicio del Toro, who plays the doomed Larry Talbot, looks miserable in every scene. He does the job, hits the marks, mouths the dialogue, etc., but his eyes say, “Good God, get me outta here! I’ve been very well paid, yes, but I’m stuck in a piece of shit and my soul is writhing in pain.” Plus he’s been given an awful pudding-bowl haircut.

Why, I was asking myself, is a guy who looks like the cousin of Emiliano Zapata playing the son of a British nobleman played by Anthony Hopkins? Flashbacks of Benny’s deceased mom (i.e., Hopkins’ widow) show she was Latin, but she looks like Dolores del Rio instead of Juanita Zapata so it still doesn’t make sense. It just throws you out of the film for the guy who played a Mexican policeman in Traffic and Che Guevara in Steven Soderbergh‘s epic playing a late 19th Century Shakesperean actor holding poor Yorick’s skull.

They should have gone with…I don’t know, Chiwetel Ejiofor?

I was slumping lower and lower in my chair. Indigestion, depression. The color was draining from my cheeks. 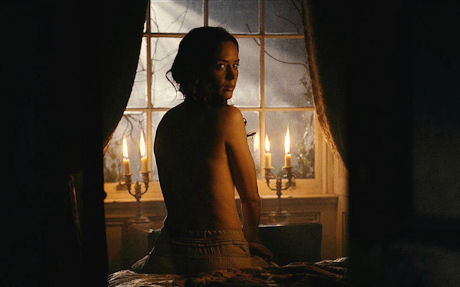 Poor suffering Emily Blunt, I was muttering to myself. Look at her trying to make something — anything! — work in terms of her cliched character.

There’s one short clip in The Wolfman that delivers a neat sense of fright. A little balding gremlin who strongly resembles Hugo Weaving is shown crawling onto a bed. But that’s it. The rest of it is rote exposition and shock-boo! cuts. There’s nothing lower in the scary flick universe than shock-boo. It’s the last refuge of hack director who can’t think of anything else, and when it’s repeated over and over and over, as it is in The Wolfman, shock-boo isn’t just irksome or tedious — it’s infuriating.

This above all else is why The Wolfman feels like it’s unfolding waist-deep in a swamp — i.e., because there’s nothing going on underneath. Rent Juan Antonio Bayona‘s The Orphanage and savor the quietly creepy vibe. Another film that had this was Mark Pellington‘s The Mothman Chronicles . A cup of serious dread is worth a truckload of shock-boo.

You can actually sense the anguish of everyone involved, including the editors. That would be Walter Murch — Mr. Fix-It! — Dennis Virkler and Mark Goldblatt.

What was the last outright stinker that Benicio made — a paycheck job that added several dozen gray hairs to his head? That would be Excess Baggage, I suppose, with Alicia Silverstone. I guess he can stand it if he does this once every ten years. It’s how he suffers for his art.